The peso starts the session with an appreciation of 0.22%, trading around 19.74 pesos per dollar, again touching a low of 19.70 pesos per dollar, a level that is consolidating as a key support amid uncertainty about the approval of new stimuli prosecutors in the United States and the availability of the Covid-19 vaccine to a large proportion of the population.

In the foreign exchange market there is moderate optimism, as most currencies gain ground against the dollar, causing the dollar weighted index to show a 0.18% decline this morning, the first in the week.

However, they said that the omission of additional unemployment benefits is unacceptable, so they continue to support the bipartisan package that has been under discussion since last week.

There is also some optimism about the negotiations between the UK and the European Union. Today, Boris Johnson and Ursula von der Leyen will meet in Brussels to try to reach an agreement.

It is important to mention that the trade agreement must be ready before the end of the year, otherwise the United Kingdom will have to face new tariffs with the European Union.

For this reason, the pound sterling is the second most appreciated currency against the dollar, showing an advance of 0.71% and trading at 1.3355 dollars per pound.

Finally, other news that could allow a greater appetite for risk during the session is that the experimental vaccine against Covid19 developed in China, showed an effectiveness of 86% in the prevention of cases in clinical trials carried out in the United Arab Emirates.

In the capital markets of Europe, average gains close to 0.37% are observed, with Germany standing out, where the DAX shows a gain of 0.84 percent.

In the United States, the main indices probably start with moderate gains between 0.1 and 0.2% according to the performance of the futures market.

In the raw materials market there are also gains in energy prices, with the WTI advancing 0.31% and trading at 45.73 dollars per barrel, while, among industrial metals, copper advanced 0.44% and aluminum 2.24 percent.

The gains in the price of oil and industrial metals are a sign of greater optimism associated with the global economic recovery.

Regarding economic indicators in Mexico, in November inflation was below expectations at an interannual rate of 3.33%, after being above 4% for three consecutive months.

At a monthly rate, inflation was 0.08%, being the lowest variation for the same month since 1969, when monthly inflation in November was 0.01 percent.

The underlying component contributed to the decrease in headline inflation, registering a decline of 0.08% per month, to stand at 3.66% year-on-year.

This was the result of the decrease in the prices of non-food merchandise (0.78% per month), impacted by the duration of 12 days of the discounts of the “Buen Fin” compared to the 4 days of last year since there was no subsequent increase in prices, as a consequence of weak consumption.

The decrease in inflation reflects the economic slack and opens space for additional cuts to the interest rate in the short term.

For its part, the non-core component showed a monthly increase of 0.56% and an interannual increase of 2.33%, where the prices of fruits and vegetables registered a monthly decline of 3.10%.

In contrast, the prices of livestock and energy products advanced at a monthly rate of 2.03% and 1.92%, respectively, the former driven by the monthly increase in the price of chicken (2.59%) and egg (5.58%) and the second, as a reflection of the increase in electricity rates (22.74%) before the end of summer rates in some areas of the country. 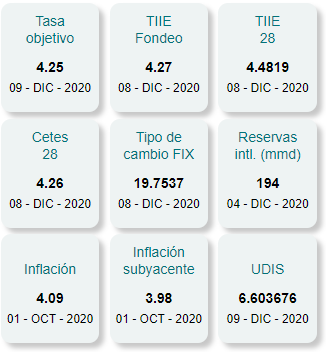 To hedge against a depreciation of the peso beyond 20.00 pesos per dollar, a purchase option (call), with an exercise date within 1 month has a premium of 1.68% and represents the right but not the obligation to buy dollars in the aforementioned level.