The foregoing is the result of an increase in risk appetite in global financial markets in the face of a combination of news considered positive:

The probability that a stimulus package will be approved in the United States this week has risen. Over the weekend, Treasury Secretary Steven Mnuchin and Speaker of the House of Representatives Nancy Pelosi continued talks around a new stimulus package.

Legislators are expected to present two proposals today, one for $ 908 billion and the other for $ 748 billion.

It is worth mentioning that there is little time for this, since this Friday is the last session of the Senate on the calendar.

Today the first delivery of the Pfizer and BioNTech vaccines will be made in the United States, after the Food and Drug Administration (FDA) authorized their emergency use on Friday afternoon.

In this first batch, 2.9 million doses will be distributed, mainly to vaccinate health workers.

It is likely that during the week the FDA will approve the vaccine developed by Moderna. Also in Singapore, the health authorities authorized the emergency use of the Covid19 vaccine from Pfizer and BioNTech, the first doses are expected to arrive at the end of the month to start the vaccination campaign.

Optimism related to Brexit and the negotiations for a trade agreement between the UK and the European Union has been renewed.

After talks over the weekend, leaders signaled that an agreement could be reached this week, before the end of the Brexit transition period on December 31.

The British pound starts the session as the most appreciated currency in the broad basket of main crosses, showing an advance of 1.38% and trading around 1.34 dollars per pound.

The peso and Banxico

For the particular case of Mexico, the approval process of the reform of the Bank of Mexico Law continues to be a risk. Over the weekend, the Mexican Banking Association (ABM) issued a statement warning that the reform could compromise the integrity of Mexico’s international reserves, affecting the stability of the country’s financial system.

For now, the perception of risk is likely to decrease, since today the reform of the law will not be debated in the Chamber of Deputies and tomorrow the ordinary period will conclude, so it is likely that the discussion will begin until January.

It is worth mentioning that, taking into account central bank autonomy metrics at a global level and inflation data from the early 1990s, it is observed that there is an inverse relationship between the degree of autonomy and inflation, that is, the lower autonomy, the higher the inflation levels, mainly in emerging economies.

The reform of the Bank of Mexico law that violates the autonomy of the Central Bank could become an impediment to the correct achievement of its priority objective of low and stable inflation. 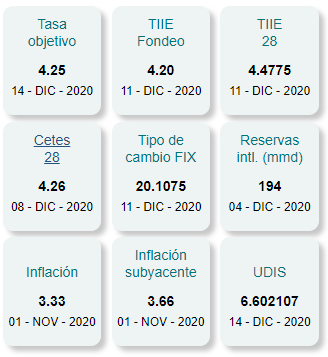 During the week, the monetary policy decision of Banco de México scheduled for Thursday 17 at 1:00 p.m. will be relevant, where Grupo Financiero Base anticipates that the interest rate will remain unchanged at 4.25%, pending that the downward trajectory of inflation is confirmed.

It is worth mentioning that the inflation figure for November, which stood at 3.33% year-on-year, opens the door for the cycle of interest rate cuts to restart, which will probably occur in February 2021.

During the session, the exchange rate is expected to trade between 19.99 and 20.20 pesos per dollar.

To hedge against a depreciation of the peso beyond 20.50 pesos per dollar, a purchase option (call), with an exercise date within 1 month has a premium of 1.53% and represents the right but not the obligation to buy dollars in the aforementioned level.