The peso begins the session with an appreciation of 0.24% or 5.3 cents, trading around 22.11 pesos per dollar, although a mixed performance is observed between the main crosses of the dollar.

The dollar weighted index lost for the sixth consecutive session, but only 0.03%, a sign that an upward correction of the dollar could be observed in the face of greater caution.

Today at 1:00 p.m. the minutes of the Federal Reserve corresponding to the monetary policy meeting of July 29 will be published.

The market will be attentive to possible signals about the strategy that the central bank will follow in its next decision on September 16, the date that the Federal Reserve’s growth and inflation projections will also be updated.

On the other hand, tensions between China and the United States continue to rise, after the United States Department of Commerce recommended that colleges and universities dispose of their Chinese holdings, given the possibility that measures will be applied that lead to the exclusion of the Chinese-origin companies on the US stock exchanges by the end of next year.

Also yesterday, Donald Trump said he canceled the talks that were planned with China to assess the progress of the phase one trade deal. It should be remembered that only on Monday night the United States Department of Commerce reported that non-US companies will also require a special permit to market American components with the Chinese company Huawei Technologies.

The peso and international trade

The escalation of tensions between China and the United States is a factor that is probably related to the presidential elections of November, where, amid the worst recession since the Great Depression and in a scenario of great uncertainty, Donald Trump seeks to show himself as a strong president in the face of threats from abroad, with the aim of saving his re-election.

This implies that, during the next 11 weeks, the electoral process will be an additional source of uncertainty for the markets, since the approval process of a new stimulus package in the United States has also been politicized.

It is important to remember that, in the short term, Mexico’s economic recovery depends to a large extent on exports, which in turn depend on the rate of recovery of the US economy.

On the other hand, global coronavirus cases exceeded 22 million and the continuous increase has caused different countries to reimpose security measures to prevent the transmission of infections. 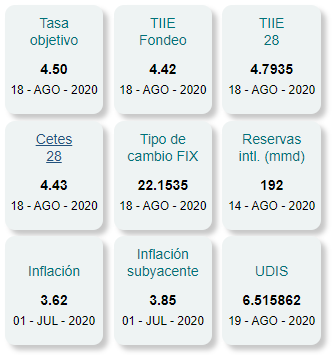 In Greece, the government indicated that people should wear mouth covers in public places, and they also suspended meetings of more than 9 people in tourist areas.

On the other hand, the government of Finland imposed border controls and restricted the entry of tourists from Germany, Greece, Ireland and Japan to stop the spread of the virus.

For its part, in metals, the price of gold cut its gains yesterday, losing 0.73% and settling at 1,988.98 dollars per ounce, a sign that the level of 2,000 dollars per ounce has become an intermediate resistance. Silver loses 1.05% while zero loses 0.36 percent.

To hedge against a depreciation of the peso beyond 22.50 pesos per dollar, a purchase option (call), with an exercise date within 1 month has a premium of 1.68% and represents the right but not the obligation to buy dollars in the aforementioned level.