The peso begins the session with an appreciation of 1.14% or 25.2 cents, trading around 21.90 pesos per dollar, along with a general strengthening of most currencies.

This morning the weighted index of the US currency shows a decline of 0.84%, its largest daily fall since May 26 of this year, reaching its lowest level since May 15, 2018.

The weakness of the dollar is due to the fact that the market is assimilating the comments of the president of the Fed, Jerome Powell on Thursday morning, in which he pointed out that a possible overheating of the economic activity in the United States is not an immediate concern.

Powell’s central message is that the Fed will keep interest rates low for a long time, even if inflation is above the long-term target of 2 percent.

In the foreign exchange market, almost all currencies gain ground, standing out the South African rand with 2.10% advance, the Norwegian krone with 1.38%, the Swedish krona with 1.25%, the Australian dollar with 1.20%, the Polish zloty with 1.20%, the Japanese yen with 1.18% and the Mexican peso with 1.14 percent.

The Japanese yen advances despite the fact that last night the Japanese Prime Minister, Shinzo Abe, announced his resignation after 8 years in office, due to the deterioration in his health and in order to receive treatment for his chronic illness.

Abe indicated that he will remain in office until the Liberal Democratic Party elects a successor.

The peso and Japan

It should be noted that the reaction of the foreign exchange market to Abe’s resignation has been moderate, since there is confidence that there will probably be continuity of policies, especially since the highly flexible positions in the monetary and fiscal area will be maintained in the coming months as a result of the coronavirus crisis.

However, the capital market reacted negatively in Japan, where the Nikkei index lost 1.41% in the session on Friday, closing the week with a moderate decline of 0.16 percent.

For their part, the prices of precious and industrial metals are increasing significantly.

The price of gold registered an increase of 1.48%, reaching 1,958.1 dollars per ounce, probably as a result of the accommodative positioning of the Federal Reserve yesterday morning.

For their part, industrial metals started the session with gains due to the expectation of a greater demand for these commodities given the accommodative stance that the Fed could take.

Copper shows an increase in its price of 1.37%, while the price of nickel increases 1.74% and aluminum increases 1.21 percent.

On the other hand, last night, Donald Trump, accepted the presidential nomination of the Republican party.

In his speech, the president promised to use his second term to fix the difficulties caused by the virus, including public health and economic recovery.

In addition, he warned that his opponent, Joe Biden, could undo his trade policies and serve as a “Trojan horse for socialism.”

As mentioned above, in the coming weeks the financial markets will pay more attention to the electoral process in the United States, which could cause episodes of volatility.

Regarding economic indicators, during July personal income in the United States increased at a monthly rate of 0.4% and at an annual rate of 8.2%, mainly due to the fiscal stimuli applied in that country. 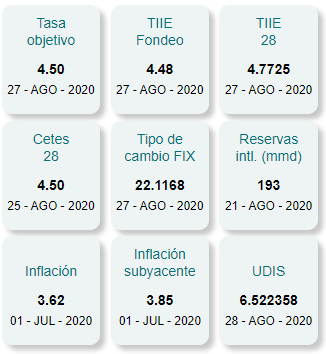 Likewise, the savings rate was 17.8%, from 19% in the previous month. The rate continues well above the average of 7.94% observed during 2019, indicating caution on the part of consumers.

For its part, consumption increased at a monthly rate of 1.9%, while in its annual variation personal consumption decreased 2.8 percent.

During the session, the exchange rate is expected to trade between 21.80 and 22.05 pesos per dollar. The euro starts the session with an appreciation of 0.61%, trading at 1.1894 dollars per euro, while the pound appreciates 0.68% and trading at 1.3291 dollars per pound.

To hedge against a peso depreciation beyond 22.50 pesos per dollar, a purchase option (call), with an exercise date within 1 month has a premium of 1.26% and represents the right but not the obligation to buy dollars in the aforementioned level.