In the foreign exchange market, the Mexican peso is the most appreciated currency, followed by the New Zealand dollar, which advanced 0.45%, the Australian dollar with 0.36% and the South African rand with 0.24 percent.

For now, the performance of the peso has become detached from the Brazilian real and the Turkish lira, which lose 0.39% and 1.05% respectively, being the two most depreciated currencies in the foreign exchange market.

Despite the risks in global economic activity, capital markets show moderate advances in Europe, with the main indices advancing close to 0.40% on average.

In the United States, the futures market indicates that the indices will open with setbacks close to 0.15 percent.

It should be noted that the pharmaceutical companies Pfizer and BioNTech plan today to request authorization for the emergency use of their vaccine in the United States. Approval by the Food and Drug Administration (FDA) would allow the vaccine to be administered to high-risk populations by the end of December.

On the other hand, severe containment measures continue to be implemented. Madrid authorities reported that its borders will remain closed from December 4 to 14, preventing people from entering or leaving the city, as an additional measure to stop the contagion of Covid19.

Likewise, in Singapore, restrictions on the border were tightened, as of November 22, people coming from Malaysia or Japan will have to remain in quarantine for 14 days, given the increase in cases in these two countries.

In the United States, the governor of California, Gavin Newsom, imposed a curfew from 10:00 p.m. to 5:00 a.m. The measure will take effect tomorrow, Saturday, November 21, and will have an initial duration of one month.

On the other hand, officials from the Fed and the US government sent mixed signals to the market about the future of emergency support programs.

Treasury Secretary Steven Mnuchin said he will allow several emergency loan programs from the Federal Reserve to expire. In a letter to Jerome Powell, Mnuchin indicated that the programs “have clearly achieved their objectives,” so he does not believe it is necessary to give an extension beyond December 31.

However, Powell disagreed, as the economy remains weak and vulnerable.

Regarding economic indicators, in Mexico the Monthly Survey of the Manufacturing Industry (EMIM) for September revealed that the employed personnel in manufacturing increased 0.39% per month, according to figures adjusted for seasonality, while in annual terms it shows a fall 3.02%, accumulating 13 months down.

Regarding the hours worked, a growth of 0.53% was observed compared to August and a contraction of 4.66% per year.

In contrast, real average wages presented a modest monthly decline of 0.02%, to be 0.27% below what was observed in September 2019.

In original figures, the value of the production of the manufacturing sector recovered strength registering a real annual increase of 0.25%, the first after 17 months of decline.

Finally, an advance was observed in the plant capacity used, reaching 75.5% from 71.7% the previous month, approaching the pre-pandemic levels of 80 percent.

In conclusion, manufacturing rebounded during September, supported by a strengthening of external demand, evident in the Trade Balance of the same month (September), where manufacturing exports almost reached a complete recovery, since in their annual comparison these exports show a decline of only 0.89 percent. 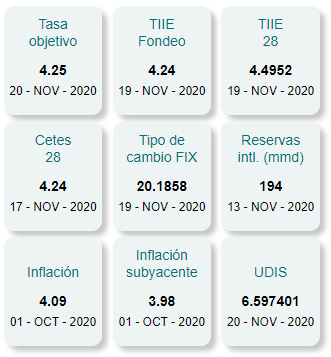 During the session, the exchange rate is expected to trade between 19.98 and 20.21 pesos per dollar.

To hedge against a depreciation of the peso beyond 20.50 pesos per dollar, a purchase option (call), with an exercise date within 1 month has a premium of 1.71% and represents the right but not the obligation to buy dollars in the aforementioned level.