At the forefront of all the products exported by the United States in 2020 were civil aircraft, including their engines and their parts, according to data from that country’s International Trade Commission (USITC).

Foreign sales of those products were worth $ 71.58 billion last year, a 43.2 percent year-on-year drop.

In general, due to the pandemic, manufacturing, industrial and service production began to decline in March 2020 and fell further the following month. 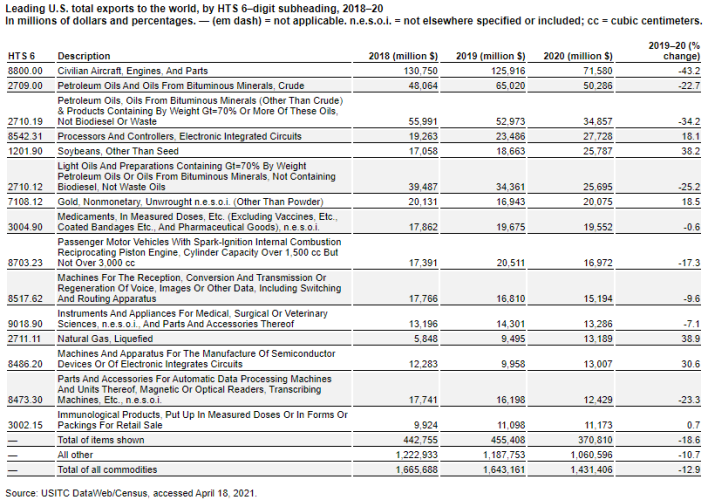 Then, in May 2020, a rapid recovery began as social distancing measures and stay-at-home orders were relaxed, although over the following months, production growth in these categories fluctuated markedly.

Already in July 2021, according to data from the Treasury Department, industrial production in factories, mines and public services in the United States increased 0.9 percent.

During the 12 months ending in July, production increased 6.6%, in contrast to the 7.0% drop during the previous twelve months.

Other of the main products exported by the United States in 2020 were: crude oil, other petroleum oils, integrated electronic circuits, soybeans, medicines, gold, cars, medical instruments and natural gas.

Manufacturing production, which accounts for about 75% of all industrial production, increased 1.4% in July and was 7.4% higher last year, after a 6.4% decrease in the previous 12 months.

In relation to its pre-pandemic level, manufacturing production was 0.8% higher.

Also the production of motor vehicles and parts has fluctuated from month to month since the record monthly gains seen during the summer of 2020 when factories that had previously closed reopened.

This year, car production has been constrained by a global semiconductor shortage, with the production of motor vehicles and parts declining in the three consecutive months through June 2021.

Currently there are signs that the shortage is beginning to ease, and in July, production of motor vehicles and their parts increased 11.2 percent.