The European Union, the United States and Russia were among the top exporters of mining products in 2020, the World Trade Organization (WTO) reported.

They were followed by: the United Arab Emirates, Saudi Arabia, Australia, Canada, China, Brazil and the United Kingdom.

During 2020, precious metal prices continued to be quite volatile, with the price of gold trading at a low of about $ 1,450 an ounce in March and a high of about $ 2,075/ounce in August.

The price of silver was characteristically more volatile, trading at a low of around $ 11.65/ounce in March and a high of almost $ 30/ounce in August. 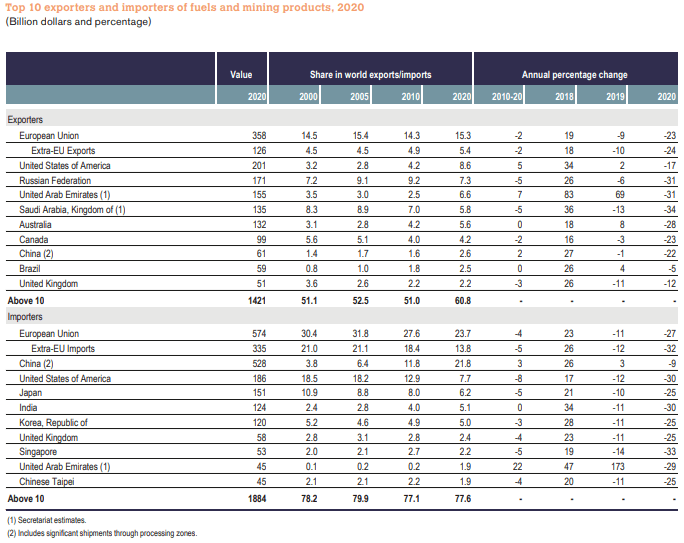 According to the company Almaden Minerals, volatility occurs in a context in which central banks reduce interest rates and countries around the world accumulate massive debts even during good times and now they are aggravated in the presence of the pandemic of Covid-19.

At the same time, consumers have accumulated a large amount of debt due to low interest rates, and the likelihood that higher consumer spending can rescue everything seems low.

The European Union exported 358,000 million dollars of mining products in 2020, although this figure drops to 126,000 million if only extra-regional flows are considered.

With respect to the United States, this indicator was 201,000 million dollars; while Russia’s was $ 171 billion.

For Almaden Minerals, it remains very difficult to predict the trajectory of the Covid-19 pandemic, but the effects are already drastic.

Situations in which there is a greater risk to established financial and social structures are the classic reason for owning gold and silver as preservatives of savings and value.

However, even the values ​​of precious metals and the values ​​of companies that are dedicated to their exploration, development and production are not immune to the repercussions derived from the crisis.

Due to difficult financial conditions around the world, mineral exploration has suffered and much of resource development (including that of Almaden) has been held back by opposition from anti-development activists, in many cases from outside. from local communities to development projects.

But the demand and need for precious and other metals will continue to grow.

Known deposit reserves are being depleted and the need for replacement will increase.

Both the shortage of funds for new discoveries and the difficulty in developing new resources are likely to limit the supply of metals to a growing and developing world population.

The company believes that in the long term, metal prices will be constructive for both exploration and development activities.