The global nominal container fleet grew 3.1% in the second quarter of 2020 and stood at 23.4 million TEU at the end of the period, according to the shipping company Maersk.

Above all, the slowdown in demand driven by Covid-19 and increased uncertainty continued to cause suspensions of container services and travel blocking. 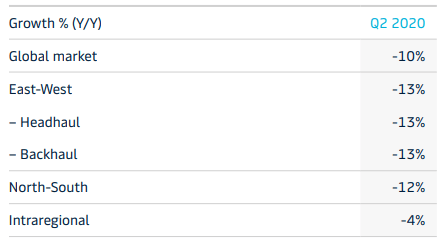 Bunker fuel prices fell in the second quarter compared to the first quarter, this, together with the impact of declining demand resulting from the Covid-19 pandemic, caused the prices of HSFO, VLSFO and LSMGO to fall from the first. to the second quarter by 32-45% and 28-44% in Singapore and Rotterdam, respectively, according to Ship & Bunker prices.