The WTO published an analysis of the Free Trade Agreement between the UK and South Korea, two economies with high integration to global value chains.

Over the 2018-2021 period, UK imports from South Korea were less diversified than its global imports, with vehicles and machines accounting for almost two-thirds of UK merchandise imports from Korea.

In the case of South Korea, these same products were the main export products and accounted for respectively 15 and 43% of its exports.

The bilateral and global product structure of Korea’s imports is relatively similar.

Also, the top four products imported by Korea from the United Kingdom were machinery, minerals, vehicles and chemicals, which accounted for 15-20% of bilateral imports.

Machines, vehicles and chemicals were also the UK’s top global exports, accounting for 21%, 15% and 14%, respectively, of global exports. 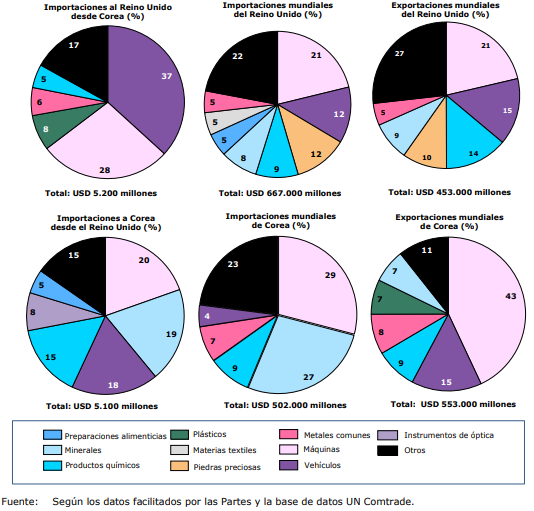 Korea’s share of commercial services trade accounted for 1.8% of world exports (valued at $86 billion) and 2.2% of world imports ($102 billion).

Both imports and exports with the rest of the world declined during the period; imports declined more rapidly, resulting in a reduction in Korea’s world trade deficit.

There have been no major changes in the sectoral composition of Korea’s services exports and imports.

Transportation services, other business services, and travel-related services accounted for about 66% of total exports and 69% of total imports in 2020.

At the beginning of 2021, 74.2% of Korea’s Tariff (81.6% of imports) was already duty-free for products originating from the UK as a result of the liberalization provided for in the EU-Korea Agreement.

Most of the lines subject to duty will be eliminated in different stages, so that by the end of the implementation period in 2031, only 69 lines will remain subject to duty.

At the beginning of 2021, 52.6% of the UK Tariff (52.9% of imports) was already duty-free for products originating from Korea as a result of the liberalization provided for in the EU-Korea Agreement.

At the end of the implementation period, 36 lines remained subject to duty.