The Federal Electricity Commission (CFE) of Mexico reported that its share of clean energy rose from 16 to 19.4% in the total energy it generated in 2019 and 2020, respectively.

The largest participant in this scenario was generation with hydroelectric energy, with 59.78 percent.

Then it was followed by Nucleoelectric, with 25.66%, and the rest with 14.56%, with Geothermal, Wind and Photovoltaic technologies.

According to the CFE, the participation shows the strength of the Hydroelectric system, which contributes significantly and in a short time, responding to the resource needs of both power and voltage regulation (Synchronous Capacitor).

Even with strong impacts on generation, such as the health contingency and the entry of new generators, hydraulic generation was the one that contributed the most.

Likewise, last year, 19.44% of generation was based on clean energy, considering the participation of the Subsidiary Productive Companies (EPS’s) of CFE Generation I, II, III, IV, V and VI.

Below are the percentages of contribution of clean energies in Net Generation by process: 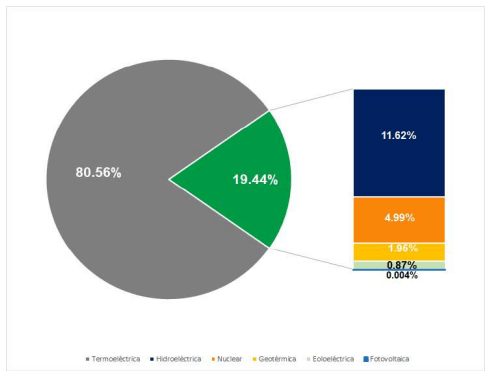 The CFE remains the largest generator of clean energy in the country.

With regard to Clean Energy Certificates (CELs), SENER entered CONAMER, the Draft Agreement that seeks to recognize the issuance of said certificates to the legacy clean power plants (CONAMER 2019).

The agreement was published in the Official Gazette of the Federation in October 2019, but in the face of amparo lawsuits promoted by private generators, these modifications are suspended; at the end of 2020 there is still no final resolution. 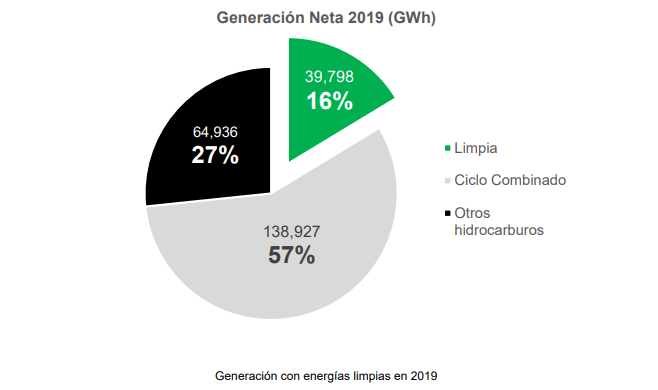 In 2020, the CFE Generation VI through the Humeros Geothermoelectric Power Plant (units 10 and 11) generated 300,838 CEL’s, which were accredited by the CRE in its platform “System for the Management of Certificates and compliance with Clean Energy obligations ( SCEL) ”, delivered through the same system to CFE Basic Service Provider to honor the obligations of the Legacy Contract.