Fresnillo plc in topped the ranking of the largest silver producing companies in the world in 2019, with 54.6 million ounces.

Silver’s unique characteristics – including exceptionally high electrical and thermal conductivity – mean that demand is led by the industry, buying around 60% of production.

Looking towards 2020, with strong industrial demand, backed by the rejuvenated attraction of silver as a safe harbor asset, and with India, leading the demand for jewelry and silverware, the small surplus expected by the Silver Institute in 2019 it must be absorbed, helping to benefit the metal price, according to Fresnillo plc forecasts.

Fresnillo plc is consolidated in Mexico, the second largest economy in Latin America.

From the perspective of this company, Mexico is characterized by a mature fiscal and legal framework. Although the country has a 500-year-old mining tradition, its geological potential remains as strong as ever, with more than 240 societies dedicated to mining projects in the country.

The industry in Mexico directly employs more than 379,000 people and represents 8.3% of the Industrial Consumer Price Index of Mexico.

In silver, Fresnillo plc considers its peer group to be other major silver mining companies, despite the fact that nearly two-thirds of global production is derived as a by-product of gold, lead, zinc and copper mines.

Furthermore, Fresnillo plc is the largest gold producer in Mexico. 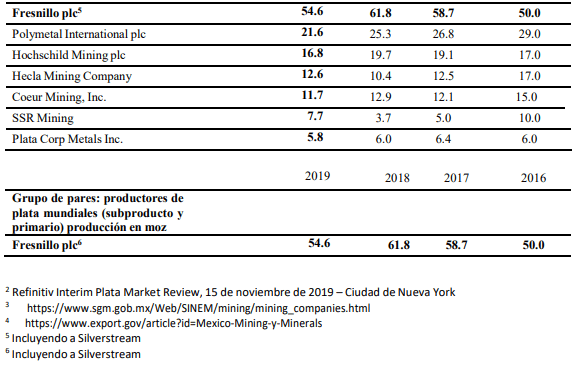