The Members of the World Trade Organization (WTO) with the highest number of Regional Trade Agreements (RTAs) in force are the European Union, the States of the European Free Trade Association (EFTA) and Chile, with more than 25 RTAs in vigor each.

They are followed by Singapore, Mexico and Turkey, with more than 20 RTAs in force each, according to information from the WTO.

Other developing countries, such as the Republic of Korea, Peru, India and Panama, also have several RTAs in force.

While new Regional Trade Agreements continue to be notified to the WTO, RTA partners are also making changes to existing RTAs to add new provisions or update them according to their trade needs.

In this regard, it is worth highlighting the renegotiation of the North American Free Trade Agreement (NAFTA), which has been renamed the Agreement between Mexico, the United States and Canada (USMCA), entered into force on July 1, 2020.

The Regional Trade Agreements signed between Canada and Chile, Canada and Israel, and the EU and Mexico have also been “modernized”.

In addition, Mexico participates in the Pacific Alliance (with Chile, Colombia and Peru), which consolidates the existing bilateral FTAs ​​of the parties and updates other types of provisions.

WTO members with the highest number of RTAs in force 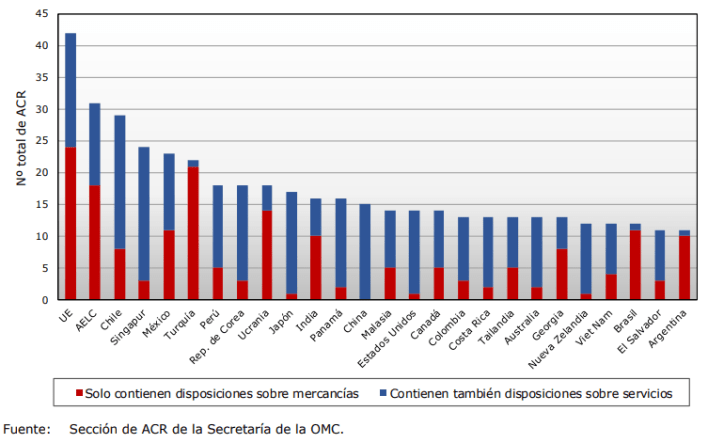 The African Continental Free Trade Area (AfCFTA) entered into force in July 2019 and, once the remaining chapters are negotiated, it will consolidate the existing preferential relations in Africa.

Participation in negotiations for new bilateral and plurilateral Regional Trade Agreements remains high, according to the WTO.

MERCOSUR recently concluded negotiations with both the European Union and EFTA and continues to negotiate with Canada, the Republic of Korea and Singapore.

The United States and Japan concluded the first stage of their agreement, which covers mainly agricultural products.

The United States appears to be negotiating similar Regional Trade Agreements in stages with other partners, namely Brazil, China and India.

Negotiations are continuing to complete the Regional Comprehensive Economic Partnership (RCEP) Agreement, which brings together 16 Parties, namely the 10 ASEAN member states and six other countries with which ASEAN already has RTAs in force (Australia, China , India, Japan, New Zealand and the Republic of Korea).