The United States, Canada and Germany remained the leaders in the Foreign Direct Investment Confidence Index 2021, prepared by the consulting firm AT Kearney.

Compared to the 2020 edition, these three countries remained in the same positions as the previous year.

With six countries, the Asia-Pacific region has the second largest share.

Only three nations from the Americas made it into the top 25 (United States, Canada, and Brazil). 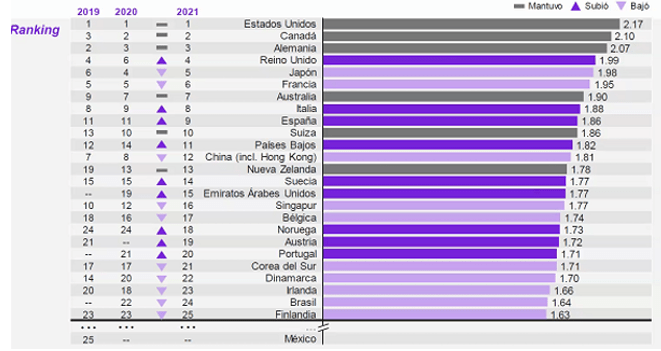 In an environment characterized by heightened investor caution, this year’s survey results reaffirmed the shift toward safety seen in previous years.

The new findings from AT Kearney show a clear bias for larger and more advanced markets as the same six economies were at the top of the rankings last year.

In fact, this year marks the third time in the Index’s 23-year history, and the third year in a row, that developed economies rank in the top five.

Additionally, the overall scores for each of the top 25 were lowered compared to previous years, according to the consultancy.

Only five economies scored higher than in 2020, albeit marginally: the United Arab Emirates, Norway, Austria, Portugal and Denmark.

The United States ranked first in this year’s index for the ninth year in a row.

Although the anticipation of a post-Covid-19 recovery in the US economy likely influenced the rankings, AT Kearney noted that the survey was conducted on the ground just days after the Jan.6 siege of the Capitol.

According to AT Kearney, these attacks, along with uncertainties clouding the security of Joseph Biden‘s presidential inauguration, may have lowered the country’s overall score.

France fell to sixth place after ranking fifth for three years in a row, a position now held by Japan, which fell from fourth place last year.

It is noteworthy that the top 10 economies in the Index remain unchanged from 2020, apart from Spain replacing China in the top 10 and China falling to 12th.

This is likely a reflection of the continued preference for advanced economies.

The list of countries remains almost unchanged from last year, with one exception: Austria rejoins the Index, while Taiwan (China) falls.