Amazon, Alphabet and Facebook were the 20 largest Internet companies in the world, by market capitalization, reported the Economic Commission for Latin America and the Caribbean (ECLAC).

A report by ECLAC states that during the first years of economic opening, in world markets China was seen as a production center that operated by imitation, where innovation and skills to develop new technologies were scarce. 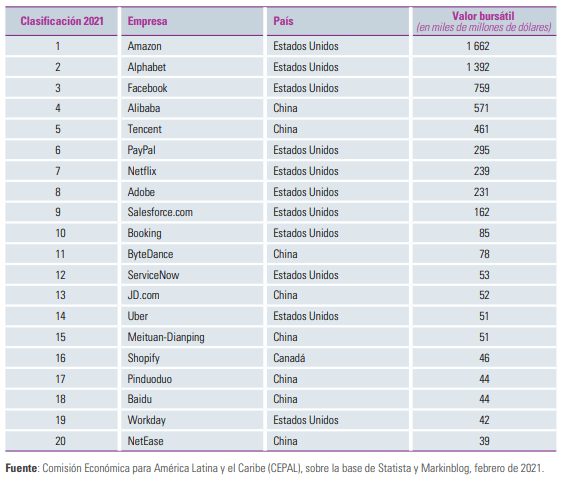 This situation has changed greatly, and the new technology sectors, as well as venture capital investments in the digital technology sector, have received an unprecedented boost from this country.

Thus, concludes ECLAC, the so-called Chinese technological giants have an increasingly important weight in the global digital economy, and Chinese Internet companies are the ones that have the most capacity to compete with the United States.

With some 1.4 billion inhabitants, China is the world’s largest e-commerce market, accounting for more than 40% of the value of e-commerce transactions globally.

Its young population and fond of new technologies is slowly closing the gap between the country and the United States.

From the beginning, technology policies were an integral part of the Chinese development model. In the last decade, indicates ECLAC, these policies have been expressed more and more clearly in national development plans.

The objective of the Made in China 2025 plan is to promote the technological sophistication of the manufacturing industry so that it moves up the value chain and thus reduce the country’s dependence on imports and investments of foreign technology.

The plan, which is inspired by the Industry 4.0 plan. from Germany, focuses on smart manufacturing in 10 strategic sectors:

In this way, the Made in China 2025 plan aims to ensure China’s position as a world power in these high-tech sectors.