Mexico remained the leader among the world’s largest avocado exporters in 2019, according to data from the Food and Agriculture Organization of the United Nations (FAO).

FAO estimates that global avocado exports will reach a new high of around 2.3 million tonnes in 2019, representing an expansion of 7% compared to 2018.

The main drivers of growth continue to be strong global demand and lucrative export unit prices, which stimulate significant investment in acreage expansion in both major production and emerging areas.

However, weather-related production declines in several producing countries, especially in Peru and South Africa, hurt the overall potential of the market, which grew at a considerably lower rate than the annual average of 15% observed during the period 2014-2018.

It is estimated that Mexico, the main exporter, will register a slight increase in world market share of two percentage points, to 58% in 2019, due to the expansion of the surface, favorable weather conditions and the improvement of the returns.

FAO expects production to slightly exceed 11 million tonnes by 2029, more than two and a half times the 2009 level.

In Asia, among the largest avocado exporters, Israel stands out (96,000 tons; while in Africa, South Africa dominates (48,000 tons).

Avocado production is concentrated in a small number of regions and countries, and the top 10 producing countries account for more than 80% of world production and around 70% of production takes place in Latin America and the Caribbean.

Finally, among the largest avocado exporters is also the United States (59,900 tons). 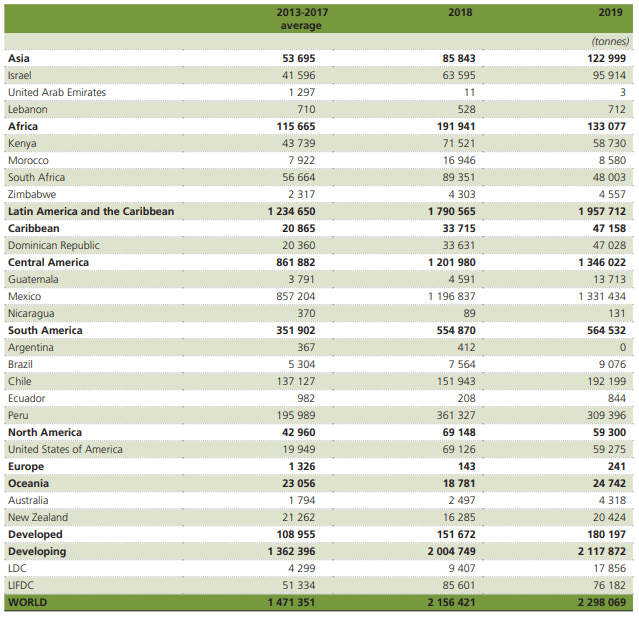