The United States topped the ranking of the largest importers of health products in 2018, with a share of 22.5% of the world total, according to a report by the World Trade Organization (WTO).

Other prominent importers of health products were the European Union (with a share of 18.5% of the total) and China (11.5 percent).

Prepared by the World Health Organization (WHO), the World Intellectual Property Organization (WIPO) and the WTO, the report is entitled: “Promoting access to technologies and innovation in medicine”.

It is interesting to note that a small number of countries represent the majority of imports of public health products, although this pattern has begun to change with the appearance of new actors.

The United States, the Member States of the European Union, China, Japan, Switzerland and Canada represent 65% of all imports of health products worldwide.

The importance of imports from developed countries can be explained by their relatively high share of public and private spending on health care and their greater integration in vertical supply chains, boosting trade flows.

However, the share of total imports from developed countries is slowly decreasing as new players emerge.

Although developed countries imported almost 70% of all commercial health-related products in 2010, their share dropped to 57% in 2018.

In particular, China has risen in less than a decade to rank third among importers of health products. It is also the world’s largest importer of certain product categories, such as medical technology equipment (category C2). 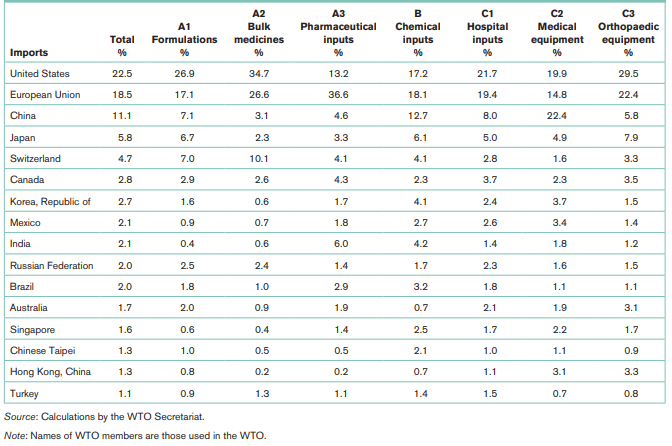 In addition, other new players have emerged: the Republic of Korea, Mexico, India, the Russian Federation, and Brazil, for example, have become major importers overall.

A small number of countries also account for the bulk of exports of public health goods, although in terms of imports, this pattern has begun to evolve in terms of diversification.

The European Union is the world’s largest exporter of health products (33%), followed by the United States (15 percent).

Although developed countries and territories still account for just over 66% of all exports of health products, the exports of some developing countries are now significant.

China has become the world’s third largest exporter with almost 12% of world exports.

While the share of exports from developing countries is becoming more important overall, their increased share of exports of health products is more noticeable in some specific product categories.