In terms of aircraft departures, all of 15 main airports in the world posted declines with a combined decreace of 41.4% year-on-year, according to data from the International Civil Aviation Organization (ICAO).

The top 15 airports list is made up of only US and Chinese airports, with Phoenix (Deer Valley) continuing at the top.

Chicago registered the most significant drop (-69.8%), followed by Atlanta. Two Chinese airports recorded the smallest drops with less than -10% year-on-year

In terms of passengers, the top 15 airports posted a staggering -57.3% year-on-year drop.

Eleven of the top 15 airports were located in Asia/Pacific and mainly in China, due to the gradual increase in domestic traffic.

Chengdu remained in first place with the smallest contraction of -27.3%, followed by Guangzhou. In addition to Chinese airports, two Korean and American airports also ranked in the Top 15.

In terms of cargo, the top 15 airports reported a 1.8 percent year-on-year increase. 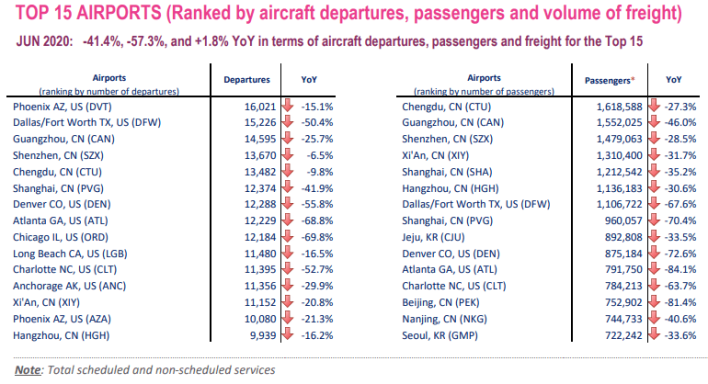 This was the first positive growth since March. More than half of the Top 15 posted a year-on-year increase with the highest growth recorded by Cincinnati (60.6%), due to an increase in freight loads in the DHL system. 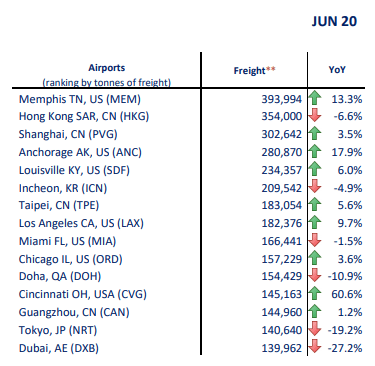 Memphis remained in first place, followed by Hong Kong with a drop of 6.6 percent.