The United States, China and Hong Kong ranked as the largest recipients of FDI in the world in 2021, according to an UNCTAD report.

FDI flows appeared to have a significant boost mainly due to the boom in mergers and acquisitions (M&A) markets and rapid growth in international project finance as a result of flexible financing conditions and significant infrastructure stimulus packages. 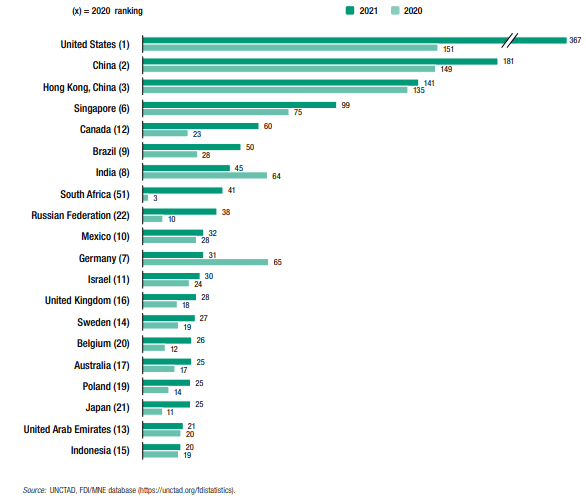 However, the global environment for international business and cross-border investment changed dramatically in 2022 with the start of the war in Ukraine, which occurred while the world was still recovering from the impact of the pandemic.

According to UNCTAD, the war is having effects far beyond its immediate vicinity, causing a triple food, fuel and financial crisis, with rising energy and commodity prices driving inflation and worsening debt spirals.

The war, with its direct implications for investment in and from the Russian Federation and Ukraine, and its ripple effects through sanctions, energy and commodity supply shortages, and broader macroeconomic impact, is not the only factor cools FDI prospects for 2022.

The upsurge of the Covid-19 pandemic in China, which is causing new lockdowns in some areas that play an important role in global value chains (GVCs), could further depress new investments in new industries in GVC-intensive industries.

In addition, expected increases in interest rates in the United States, Europe and other major economies that are experiencing significant increases in inflation could slow M&A markets later in the year and curb project finance growth. international.