Chihuahua topped the list of the leading states in exports of Mexico in 2019, with 56,462 million dollars.

Mexico is the eleventh largest merchandise exporter in the world, but these sales are concentrated in the north of the country and, more recently, in the central and Bajío region. 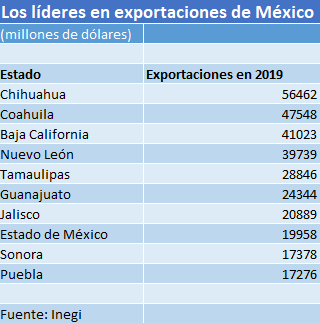 But Mexico’s exports will register a year-on-year drop of 11.6% in 2020, measured in value, projected by the Economic Commission for Latin America and the Caribbean (ECLAC).

Mexico has a large and diversified economy that is linked to its deep trade and investment relations with the United States.

The activities for the generation and dissemination of Mexico’s trade balance are the responsibility of the Foreign Trade Statistics Working Group (GECE).

The GECE is made up of the Tax Administration Service (SAT), the Ministry of the Economy (SE), Banco de México (BANXICO) and the National Institute of Statistics and Geography (INEGI), which serves as the Group’s coordinator within the framework of the Technical Committee Specialized in Foreign Trade Statistics (CTE-ECE).

The improvement of the techniques for capturing, classifying, analyzing and processing information have been some of the achievements of the GECE. For example, the substitution of the Decentralized Capture System of the Customs Request (CADEPA) by the Automated Comprehensive Customs System (SAAI) carried out by the Ministry of Finance and Public Credit (SHCP) in 1990, at the request of the Group.