China will displace Mexico in the first position among the largest corn importers in the 2021-2022 season (July / June), the Food and Agriculture Organization (FAO) projected.

FAO forecasts that world corn trade will increase only marginally, by 0.6% in the 2021/22 cycle, reaching 189 million tonnes.

For the second season in a row, the biggest increase in demand is expected to come from China.

After quadrupling its year-on-year imports in 2020/21 and moving from the ninth largest importer to the world’s leading corn importer, China is expected to further increase its corn purchases from international markets by 9.1% (2 million tonnes) in 2021/22, to 24 million tons.

At the same time, increasing demand for animal feed and industrial use, as well as efforts to replenish stocks, in addition to high domestic prices, are expected to keep China’s corn import levels well above the TRQ of 7.2 million tons by 2021. 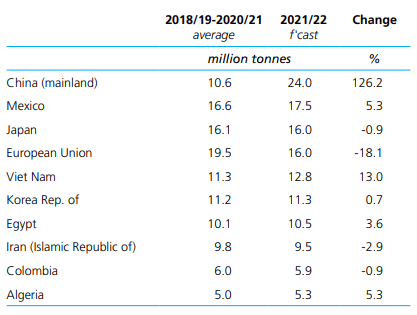 The FAO also expects Turkey to increase its maize imports by up to 48%, after a drop in 2020/21, to offset the expected reduction in production this year.

Despite an increase in production, the European Union could increase imports by 7.4% from 2020/21 levels to meet domestic demand and replenish inventories, which fell to low levels in the previous season.

Also, reduced stocks as a result of reduced production and increased consumption are expected to boost imports from Mexico by 6.1% in 2021/22.