The European Union, the United States and Brazil led the ranking of the world’s largest food exporters in 2019, according to data from the World Trade Organization (WTO).

However, this subgroup of food exporters presented a year-on-year drop.

In the sector, the external sales of the European Union fell 1%, those of the United States fell 2% and those of Brazil fell 5 percent.

In fact, exports from eight of the top 10 food exporters decreased in 2019, and Indonesian exports experienced the biggest drop (-10 percent). This was due in part to a 31% drop in food exports to India.

Argentina’s exports grew further, rising 16% in 2019, due in part to a 51% increase in cereal exports to Vietnam.

For their part, foreign sales in Mexico advanced 3 percent.

Other major exporters were China, Canada, Thailand, India, and Indonesia.

With the continued negative economic effects of Covid-19, the FFPI has been on a downward trend for four consecutive months. 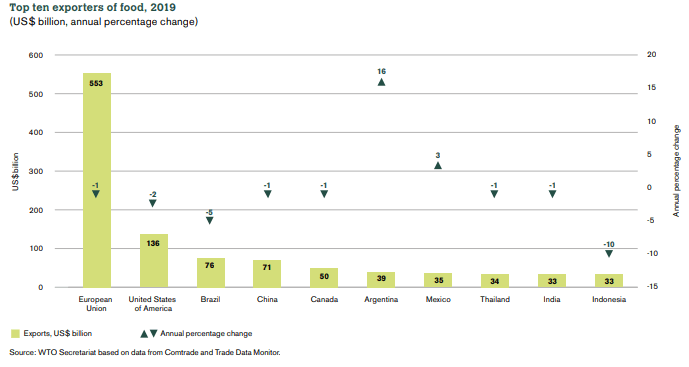 The latest drop in May reflects the drop in values ​​of all sub-indices, with the exception of sugar, which increased for the first time in three months, in the northern hemisphere.

In the coarse grains markets, US corn prices, continuing the downward trend of the past four months, fell further in May, to almost 16% below the corresponding period last year.