Nuevo Laredo topped the list of customs in Mexico with the highest value of operations, according to data from the Ministry of Finance and Public Credit (SHCP).

In total, the 10 main customs offices in Mexico accumulated a value of operations of 77.44 billion pesos.

That amount represented 74.7% of the country’s operations during 2020.

The main function of the General Administration of Customs (AGA) is to facilitate, monitor and control the entry and exit of goods and passengers from the national territory, as well as the means in which they are transported, ensuring compliance with the provisions on the matter. of foreign trade has been issued by the SHCP, as well as other secretariats of the Federal Executive with competence for it.

The AGA also supports the functions of guaranteeing national security; protect the country’s economy, public health and the environment, preventing the flow of dangerous or illegal goods into our territory, in addition to promoting voluntary compliance with these provisions by users.

Goods can be brought into the national territory or extracted from it through the following traffics:

By the latter, it refers to the introduction or extraction of goods from national territory, through pipes, ducts, cables or other means capable of conducting them. 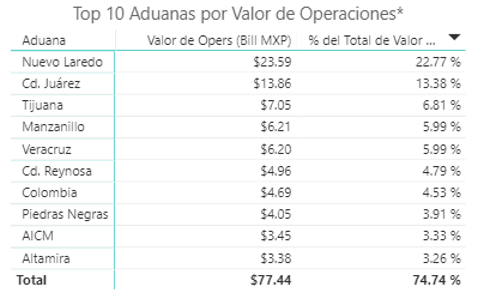 The handling, storage and custody of foreign trade goods is the responsibility of customs.

Meanwhile, “recintos fiscales” are those places where the customs authorities carry out the functions of handling, storage, custody, loading and unloading of foreign trade merchandise, inspection, as well as customs clearance thereof.