Egypt was placed in the first position among the countries that made the most wheat imports in 2019, according to statistics from the United Nations Food and Agriculture Organization (FAO).

Then followed Indonesia (with an average of 11 million tons) and Turkey (7.3 million tons on average).

Other countries with the most wheat imports were: Brazil, the Philippines, Bangladesh, Algeria, Japan, Morocco and Mexico.

The increase in imports into Europe, which partly reflects the inclusion of trade flows between the EU-27 and the UK from 2020/2021, explains most of the apparent growth in world trade in this basic grain.

FAO also believes that higher demand for imports from various countries in Asia and North Africa will contribute to the expansion.

Concerns about the possible extension of wheat export restrictions mostly abated and the initial outlook for 2020/2021 assumes that there are no new Covid-19 related obstacles affecting trade flows.

However, all this expansion is associated with higher imports from the EU-27, 1 million tonnes more than in 2019/2020 due to a likely decrease in total production this year, and expected wheat imports of 2 million tonnes. tonnes by the UK, which as of 2020/2021 is excluded from total EU imports and therefore includes purchases from EU countries.

In Africa, total wheat imports in 2020/21 are forecast at 49.5 million tonnes, almost unchanged from the estimated level for 2019/20. Insufficient wheat production in Morocco and, to a lesser extent, in Algeria and Tunisia, is expected to boost imports from these North African countries. 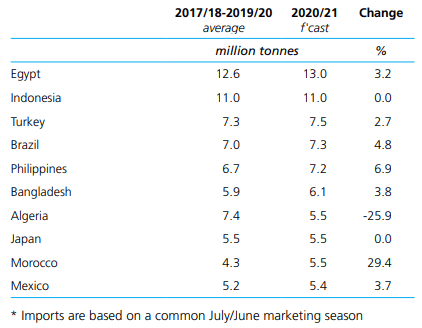 Wheat imports from Egypt, the world’s largest wheat importer, are projected at 13 million tonnes, similar to 2019/2020 despite a good domestic harvest, given the government’s recently announced intention to increase reserves in response to threats posed to global supplies by Covid-19.

Wheat imports from Nigeria, the most populous country in Africa and the continent’s third largest importer (after Egypt and Morocco), could reach 4.8 million tonnes, similar to that estimated in 2019/20.

However, always according to the FAO, the sharp depreciation of the national currency and the fall in foreign exchange reserves due to the collapse of oil prices pose significant challenges to the country’s ability to maintain its import capacity.

Wheat purchases by Indonesia, Asia’s largest importer, are likely to remain stable at 11 million tonnes thanks to continued strong demand for high-quality wheat.

Strong demand in Brazil, the region’s top wheat importer, could boost the county’s wheat imports to 7.3 million tonnes, slightly more than in 2019/2020, despite stronger domestic production.

Similarly, imports from Mexico, the region’s second-largest wheat importer, could also increase marginally, to 5.3 million tonnes, supported by continued strong demand for high-quality wheat and the likelihood of a small reduction in production. production.