In 2018-20, agriculture support policies in the 54 countries included in the OECD‘s annual monitoring and evaluation report on agricultural policies generated $ 720 billion a year in transfers to agriculture.

On the one hand, a total of $ 272 billion of that amount comes in the form of market price support paid by consumers (for example, through higher tariff prices).

According to a report by the World Trade Organization (WTO), much of this support does little or even harm its stated goals of improving food security, income and livelihoods, and environmental sustainability.

Thus, individual producers received $ 540 billion of aid annually (about 75% of all positive transfers to agriculture) through various support measures, including higher prices paid by consumers.

The most distorting forms of aid amount to $ 338 billion per year and include market price support ($ 272 billion) and payments linked to production or unlimited use of inputs ($ 66 billion).

From a WTO perspective, these measures are both inequitable (as production-linked support is disproportionately allocated to larger farms) and ineffective in transferring income to farmers (as a large part of profits trickle down in the form of higher land values ​​or input prices).

In addition, they are among the most damaging support policies for the environment, as they provide incentives for the intensification of input use, the allocation of land to sustained crops, and the entry of new land into the agricultural sector.

Variable input-based payments without appropriate restrictions can encourage excessive use of fertilizers and pesticides, causing serious damage to freshwater ecosystems and biodiversity. 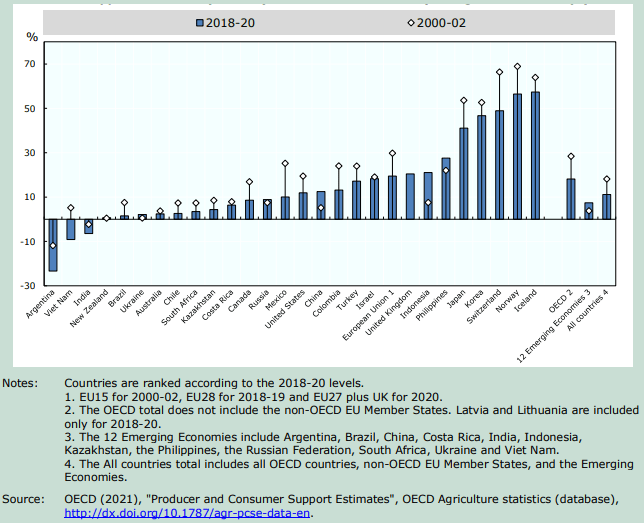 The instruments with the most positive effects on food security, income and resource use are mostly included in the general services category and, in particular, include investments in R&D, biosecurity and infrastructure.