In sum, shipments of solar panels include imports, exports, and modules produced and sold domestically, but exclude modules sent for resale.

These shipments have risen steadily since 2006, driven by significant price declines and policy incentives that encourage solar PV installation, according to the Energy Information Administration (EIA).

Solar panel shipments declined in 2017 and 2018 as policy reforms and import tariffs went into effect.

The cost of photovoltaic modules has dropped significantly since 2006, helping drive growth in solar panel shipments.

The recent drops in the price of modules and components that began in mid-2016 are related, in part, to the global excess supply resulting from declining demand in China and increased cost competitiveness within the industry . 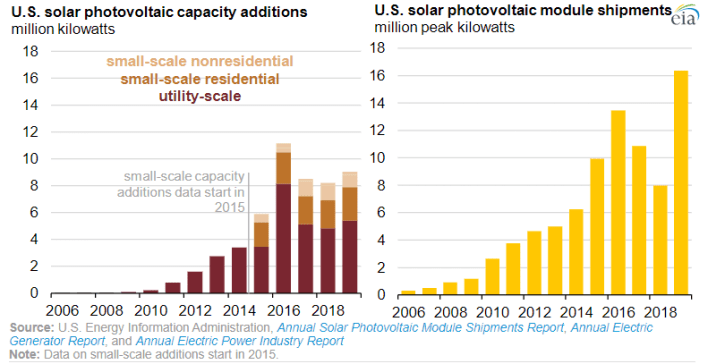 Because the United States exports few modules, shipments of solar PV modules generally track domestic PV capacity additions; the differences between the two are generally attributed to the time between shipment and installation.