With this, that number increased 18.8% compared to the first half of last year.

On the other hand, the collection in cash flow from foreign trade operations was 476,853 million pesos, increasing 55,964 million pesos, derived from the increase in VAT.

The pedimentos are documents that protect the entry or exit of merchandise from the country in each of which the importer or exporter, the supplier, a detailed description of the merchandise, value quantities, origin, tariff, regime that the merchandise will be destined is specified, name and patent number of the customs agent, customs office through which it is processed, among others. 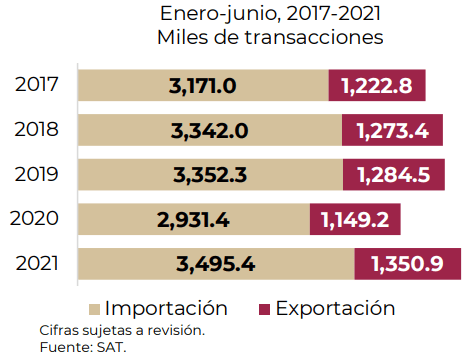 On the other hand, in the first semester of 2021, the amount collected for self-declaration of taxes from passengers at airports and borders totaled 778.4 million pesos.

Said amount was 307.1 million pesos higher than that obtained in the same period of the previous year.

On the other hand, customs inspections carried out in less than three hours reached 76.7% of the total.

Since 2020, the measures adopted to prevent the spread of Covid-19 had a significant impact on trade worldwide, which directly affected the number of foreign trade operations and the contributions related to this activity.

In order to combat corruption and increase security in customs and ports in Mexico, on December 7, 2020, the Organic Law of the Federal Public Administration, the Law of Maritime Services. Navigation and Commerce and the Ports Law were modified to transfer some of the powers of the Ministry of Communications and Transportation, including the administration and surveillance of maritime and port security, to the Ministry of the Navy.