The collection of cash flow from foreign trade operations in Mexico was 476,853 million pesos in the first semester of 2021, a year-on-year growth of 13.3%, reported the Ministry of Finance and Public Credit (SHCP).

On the other hand, in the first semester of 2021, the amount collected for self-declaration of taxes from passengers at airports and borders totaled 778.4 million pesos.

Said amount was 307.1 million pesos higher than that obtained in the same period of the previous year.

On the other hand, customs inspections carried out in less than three hours reached 76.7% of the total. 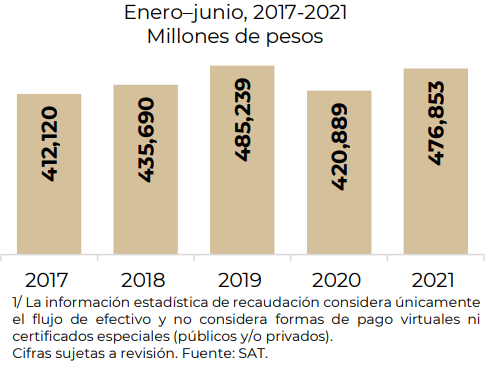 Since 2020, the measures adopted to prevent the spread of the Covid-19 pandemic significantly impacted trade worldwide, directly affecting the number of foreign trade operations and the contributions related to this activity.

In general, during the second quarter of 2021, the value of manufacturing exports, both automotive and non-automotive, showed moderate growth compared to the previous quarter.

According to the Bank of Mexico (Banxico), the advance in the value of automotive exports originated in a context of higher prices of this type of goods, since disruptions in the supply of various inputs have continued to affect their production and volume of export.

By destination, manufacturing exports to the United States continued to expand, while shipments to the rest of the world rebounded.

Likewise, in the second quarter of 2021, oil exports increased compared to the previous quarter in seasonally adjusted terms. This reflects both higher prices of the Mexican mix, and an increase in the export platform.