The UNCTAD and the OECD indicated that restrictive measures on Foreign Direct Investment (FDI) related to national security have been increased.

In particular, G20 members continued to adjust their policies related to the protection of national security interests to manage the risks that occasionally arise with foreign investment.

As in the previous reporting period, this area of ​​investment policy making has seen more intense activity among G20 members than other specific policy domains of FDI.

Furthermore, this strong activity confirms the trend observed since approximately 2017 and which continues to accelerate in G20 Members, and well beyond G20 membership. 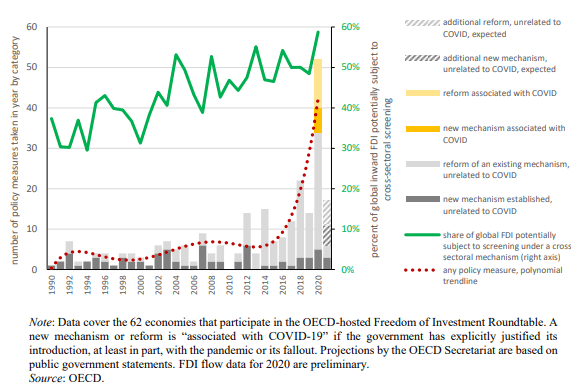 In 2020, global inflows of FDI fell by around a third compared to 2019, reaching a trillion dollars.

The pandemic accelerated an already steady decline and helped drive global FDI inflows to their lowest level in 15 years.

Capital flows to OECD countries fell to their lowest level seen since 2005, mainly as a result of significant divestments from Switzerland and the Netherlands, as well as large declines in FDI flows to the United States and other countries in the Netherlands. the OECD.

In general, and in the G-20 economies, negative intra-corporate debt flows further accentuated the fall in total FDI flows, as did the fall in capital flows, which, however, was less prominent in G-20 economies than in some advanced countries.

Flows to developing countries fell less sharply, although this was mainly due to resilient flows in Asia.

However, announcements of totally new projects, more indicative of trends in new capital expenditures on productive capacity, fell sharply, by more than those of OECD countries.

For example, the values ​​of cross-border M&A transactions in advanced economies fell 12%, despite some significant transactions in specific sectors and despite a higher number of transactions in the health and technology sectors in 2020 than observed. in previous years.

On the other hand, emerging markets and developing economies (EMDEs) experienced a greater decline in announced totally new investment projects than advanced economies.

Most of the decline in EMDEs occurred in the second quarter of the year.