According to the profile of China in its international trade, this country was the world’s largest merchandise exporter in the past year, with 2 trillion 590,221 million dollars.

Conversely, China ranked as the second country with the most imports on the planet (2 trillion 057,217 million dollars), behind the United States.

With both results, this nation covered 14.7% of the world’s total merchandise exports and 11.54% of total global imports, the World Trade Organization (WTO) reported. 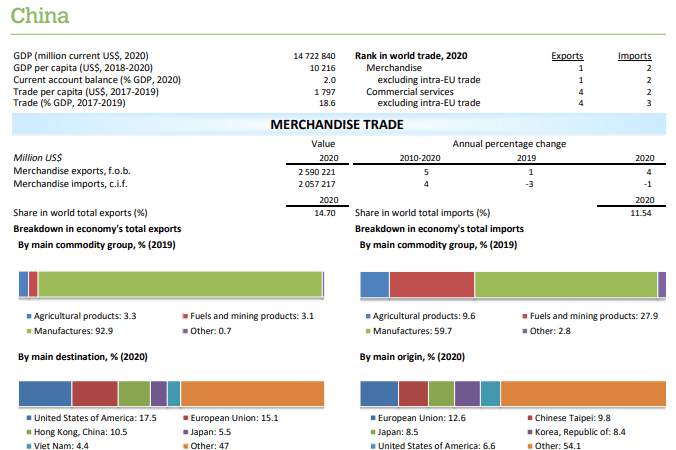 The participation of manufactures in total imports was 59.7%, followed by fuels and mining products (27.9%), agricultural products (9.6%) and others (2.8 percent).

However, with data from 2020, the agricultural products most exported by China were: onions, shallots, garlic and leeks (2,621 million dollars), parts of plants, otherwise preserved (2,522 million), other food preparations (2,327 million), vegetables, dried, including those cut into pieces (2,137 million) and apples, pears and quinces, fresh (2,117 million).

Among the agricultural products most imported by China were: soybeans (soybeans), even broken (39.528 million dollars), pork, fresh, refrigerated or frozen (11.881 million), meat of animals, the bovine species, frozen (9,771 million), malt extract (5,898 million) and palm oil and its fractions (4,123 million).

In the same way, with data from 2020, among the non-agricultural products that China exported, the following stood out: automatic machines for data processing (187,422 million dollars), radiotelephony transmitting devices (187,248 million), electronic integrated circuits (118,247 million), the others made-up articles (55,226 million) and electrical telephony devices with wires (46,805 million).

On the other hand, China’s profile in commercial services trade shows that it ranked fourth in exports, with 278.084 million dollars in 2020, and second in terms of imports, with 377.528 million.