Freshwater fish species such as tilapia, carp, catfish, and trout are produced there. 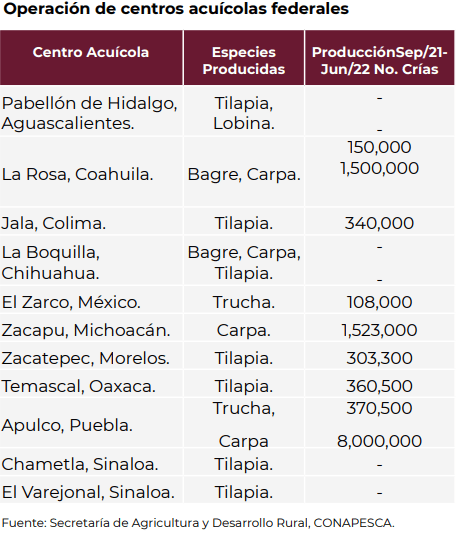 In order to increase the profitability of aquaculture production units, in the period from September 1, 2021 to June 30, 2022, through the Special Energy Program for the Countryside in the area of Electric Power for Aquaculture Use, the federal government supported 689 service numbers corresponding to 612 aquaculture facilities located in 30 states, mainly dedicated to the production of shrimp and tilapia.

The government granted the owners of these facilities an incentive price tariff consisting of a 50% discount on the value of energy consumption before the application of value added tax (VAT).

In addition, during the period in question, a discount of approximately 140.4 million pesos was applied.

According to the federal government, within the framework of the Program for the Promotion of Agriculture, Livestock, Fishing and Aquaculture, through the BIENPESCA component, food self-sufficiency and the welfare of the rural population dedicated to fishing and aquaculture activities is promoted through the granting of direct individual economic support of 7,200 pesos.

On the other hand, during the period from September 1, 2021 to June 30, 2022, 96 aquaculture titles were granted, of which 91.7% (88 titles) were for promotion aquaculture, followed by permits for the collection of broodstock from the natural environment with 5.2% (5 titles).

However, in terms of volume, Mexico’s aquaculture production has registered a downward trend. Its maximum figure was in 2017, with 404,524 tons in live weight.