Private investment in Mexico registered a 1.7% year-on-year growth in March, driven by the equipment and machinery component.

Broadly speaking, private investment (the Monthly Indicator of Gross Fixed Capital Formation -IMFBCF-) provides information on the monthly behavior of investment, made up of the assets used in the production process for more than a year and subject to to property rights.

Already in the two-month period January-February 2021, gross fixed investment had reversed the fall observed in December 2020, although at the end of that period it was 3.5% below the level of February 2020 with series adjusted for seasonality. 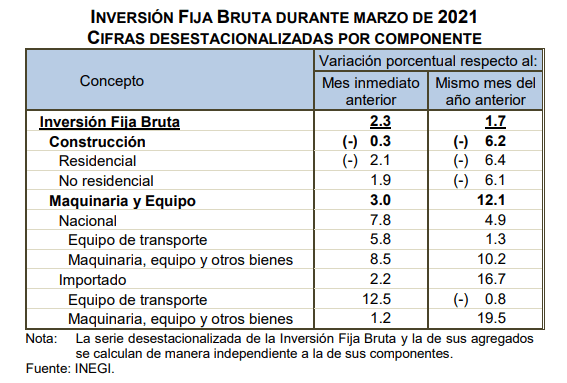 At a month-on-month rate, gross fixed investment in Mexico grew 2.3% during March, thanks to a 3.0% MoM increase in spending on equipment and machinery, which offset a 0.3% MoM contraction in construction spending.

This was the first expansion of private investment since January 2019, Inegi reported in a statement.

The IMFBCF shows how a part of the gross value added in the economy is invested instead of being consumed. Monthly data on Gross Fixed Investment have been available since January 1993 and are expressed in physical volume indices with a fixed base in 2013 = 100.

For Inegi, it is important to highlight that most of the economic series are affected by seasonal factors.

These are periodic effects that are repeated every year, and whose causes can be considered unrelated to the economic nature of the series, such as holidays, the fact that some months have more days than others, school vacation periods, the effect of weather in the seasons of the year, and other seasonal fluctuations, for example, the high production of toys in the months before Christmas, caused by the expectation of higher sales in December.