Mexico will register pork exports of about 259,100 tons in 2020, which represents an increase of 47.5% year-on-year, according to estimates from the Ministry of Agriculture and Rural Development (Sader).

Global pork imports continued to rise, driven mainly by higher imports from China, partially offset by declines elsewhere, including Japan, the Republic of Korea and the United States of America.

However, according to the Food and Agriculture Organization of the United Nations (FAO), export availabilities increased, outpacing import demand, in several key producing regions.

This resulted from a combination of factors: high pig population and live weight in the United States; reduced domestic demand in the European Union, especially in Germany, a key exporter of pork, following an increase in coronavirus infections among workers at a key processing plant; and a weaker Brazilian real against the US dollar, supporting an increase in slaughter and exports from Brazil. 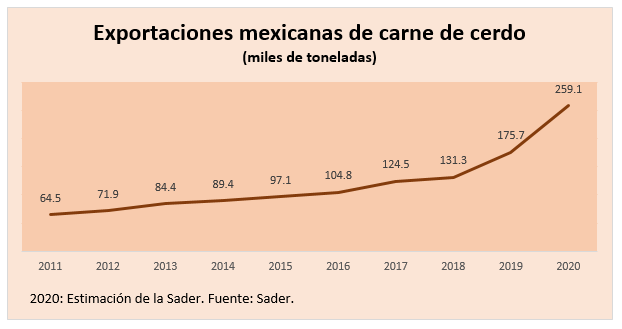 For their part, the accumulated pork exports to July 2020 amounted to 134,600 tons, 48.3% and 94.7% above the same month of the previous year and the average of the last five years, respectively.

Mexico’s pork exports have grown significantly in the last decade.

Mining: Sergio Almazán is the new president of the AIMMGM