The peso closed the session with a depreciation of 0.16% or 3.5 cents, trading around 21.95 pesos per dollar, showing a lateral performance for the third consecutive session.

During the session, the exchange rate showed little volatility, trading between 21.8786 and 21.9846 pesos per dollar, due to the fact that little relevant economic information was published for exchange market participants who are still looking for a direction.

It should be noted that the exchange rate fluctuation interval of 10.6 cents is the lowest since February 19 of this year, before the perception of risk due to the coronavirus pandemic rose.

In the foreign exchange market, the dollar remained moderately weak, losing 0.16% according to the weighted index. The most appreciated currencies were the New Zealand dollar, which advanced 1.13%, the Norwegian krone with 0.77% and the Australian dollar, which registered an advance of 0.53 percent.

In contrast, the most depreciated currency was the Brazilian real with 1.80%, after the president of Brazil, Jair Bolsonaro, rejected the fiscal plan for 2021 of the economy minister Paulo Guedes, which sought to redirect funds for economic recovery, while that Bolsonaro seeks to increase indebtedness.

The above has raised doubts about the permanence of the economy minister in his position. During the session, the Brazilian real reached a level of 5.6320 reais per dollar, approaching the maximum for the month of 5.6718 reais.

If the resignation of the finance minister is confirmed, the real could depreciate to a level of 5.97 reais per dollar, a record high reached on June 30.

The peso and Banxico

On the other hand, in Mexico the quarterly inflation report of Banco de México was published, where the inflation forecast at the end of 2020 was adjusted up from 3.5% to 3.7%, while the expected range of economic contraction in 2020 is adjusted downward from -8.8 to -4.6% to a range of -12.8 to 8.8 percent.

For its part, the expected range of growth for 2021 is between 1.3 and 5.6%. From the Banxico report, 5 points stand out: 1) they see a bleaker outlook for Mexico, 2) they expect a slower recovery, 3) if the growth of the rebound effect continues, it implies in the best scenario two years to recover GDP pre crisis. 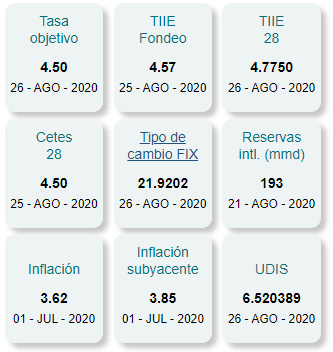 In the worst-case scenario for almost 10 years, 4) they assume that the worst is over (there is no negative rate expected for 2021), 5) the upward revision in the inflation expectation was moderate, but together with the expected fall in GDP it presents more difficult conditions for Mexicans.