The peso starts the session with little change, showing a depreciation of 0.14% or 3.02 cents, trading around 20.90 pesos per dollar, after hitting a low of 20.8452 pesos per dollar this morning.

The exchange rate shows a stable performance, like most currencies in the foreign exchange market, where a mixed performance is observed.

It should be noted that the dollar weighted index also remains stable, showing a strengthening of 0.03%. The low volatility is due to the fact that little relevant economic information is expected to be published and that a low volume of operations is observed.

Capital markets show mixed performance in Europe and little change, although there are factors that could increase volatility. On the one hand, the coronavirus continues to advance.

In France, 10,000 new cases of coronavirus were registered, the highest number since May. While, in Germany 2,179 infections were reported in the last 24 hours, a new maximum since April.

This led the German health minister to warn about the possibility of increasing restrictions in order to curb the spread of Covid-19.

The peso and the trade war

On the other hand, tensions between the United States and China could rise again. The Committee on Foreign Investment in the United States is investigating the security protocols in the handling of personal data of video game companies.

The companies in question include Tencent, a Chinese multinational. It is important to note that today is also the day known as Quadruple Witching Day, in which options and futures of stocks and indices expire simultaneously.

On this day trading volumes usually rise significantly, which could also cause some volatility due to changes in investment positions.

In the commodities market, the price of the main oil mixes begins the session with a downward correction, after the broad gains observed during the previous day, when the meeting of OPEC and its allies (OPEC +) commented that countries will have to do what is necessary in this health crisis.

Notably, Libya’s military commander Khalifa Haftar said that he will allow the production and export of his country’s oil to resume. Libya is a member of OPEC that has been producing 80 thousand barrels a day.

Far below that allowed by OPEC +, because it is in a civil war. An increase in its oil production would increase global supplies, in a period where demand is fragile.

Regarding economic indicators, in July, the seasonally adjusted figures of the Monthly Survey of the Manufacturing Industry (EMIM) revealed a monthly increase in employed personnel of 0.9%, while hours worked grew 7.4% and real average wages rose 2.4 percent.

In annual terms, both the personnel and the hours worked showed a contraction of 4.7% and 9.0%, respectively.

For their part, real wages reported an annual increase of 0.9%, after three months of negative annual variations. 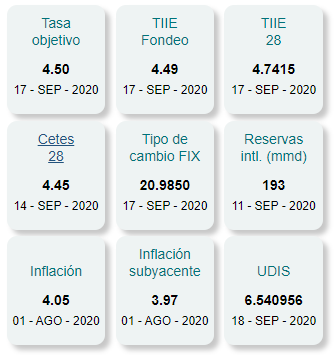 In original figures, the value of production registered an annual fall of 1.66% in July, accumulating 16 months of setbacks.

For its part, the percentage of plant used approached the pre-pandemic levels of 80%, standing at 72.9% in the reference month.

Although the EMIM shows an almost complete recovery in production as of July, the slow control of the pandemic could continue to limit the recovery of production in industries classified as non-essential.

To hedge against a peso depreciation beyond 22 pesos per dollar, a purchase option (call), with an exercise date within 1 month has a premium of 1.28% and represents the right but not the obligation to buy dollars in the aforementioned level.