The peso closed the week with little change, showing an advance of 0.03%, trading around 21.97 pesos per dollar.

Volatile sessions were observed during the week, as the exchange rate traded between a minimum of 21,9067 and a maximum of 22,3289 pesos per dollar, without a clear trend being observed.

The performance of the exchange rate was closely related to the US dollar, which also closed the week with little change according to the dollar weighted index, falling 0.04 percent.

The lateral performance is a sign that there is still uncertainty regarding the future of the economic recovery, mainly in the United States. The events that generated volatility in the week were:

Tensions between the United States and China rose as the US Commerce Department reported that non-US companies will also require a permit to trade US electronic components with Huawei, China’s tech giant.

Likewise, Donald Trump indicated that the review of the progress of the phase one trade agreement signed at the beginning of the year would be canceled.

The Federal Reserve published the monetary policy minutes, where it pointed out the existence of risks to the economy, which mainly depend on the advance of the pandemic. This sends the signal that the recession could drag on.

In Mexico, little relevant economic information was published for the performance of financial markets. The monthly statistics of the services sector and the commerce sector stood out in Friday’s session, where a stagnation of the services sector was observed in June and a monthly recovery of 7.81% of the retail trade.

The above is evidence that the vulnerability of the service sector will probably not disappear until the Covid19 pandemic ends.

In the Chicago futures market, net speculative positions awaiting an appreciation of the peso fell by 2,169 contracts in the week between August 12 and 18, reaching 4,338 contracts, each of 500,000 pesos.

The performance of the foreign exchange market was mixed, with the most depreciated currencies being the Brazilian real, which lost 3.38%, and the Russian ruble, which showed a drop of 2.52 percent.

The strength of the euro is due to a lower perception of relative risk in that region. Although the coronavirus pandemic is still in force, the risk is considered greater in the United States. Furthermore, both the Fed and the European Central Bank are expected to maintain their interest rates at current levels for an extended period of time.

In this context, the Chicago futures market has adjusted its positions in favor of the euro. On February 25, net speculative positions were awaiting a depreciation of the euro by 114,021 contracts. 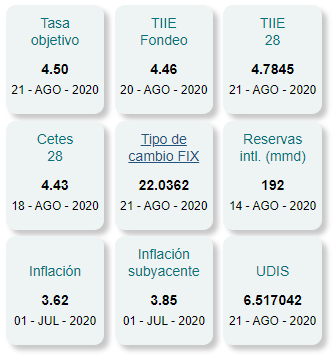 These positions turned in favor of the euro at the end of March and during April, reaching a level of 199,751 contracts awaiting an appreciation of the euro in the week between 5 and 11 August, its highest level on record.