Personnel employed in IMMEX establishments in Mexico increased at a 0.4% month-on-month rate in June, Inegi reported.

Mexico has developed its manufacturing sector with the dual objective of capitalizing: lower manufacturing overhead and its common border with the United States, its main export trading partner.

Overall, in 2020, manufacturing production performed worse than in 2019. The decline in manufacturing production occurred in the context of an overall decline in Mexico’s economy due to the negative effects of the Covid-19 pandemic, including operational restrictions in nonessential industries, reduced operational capacity, disrupted transportation networks and supply chains, and mandatory closures to contain subsequent waves of infections. 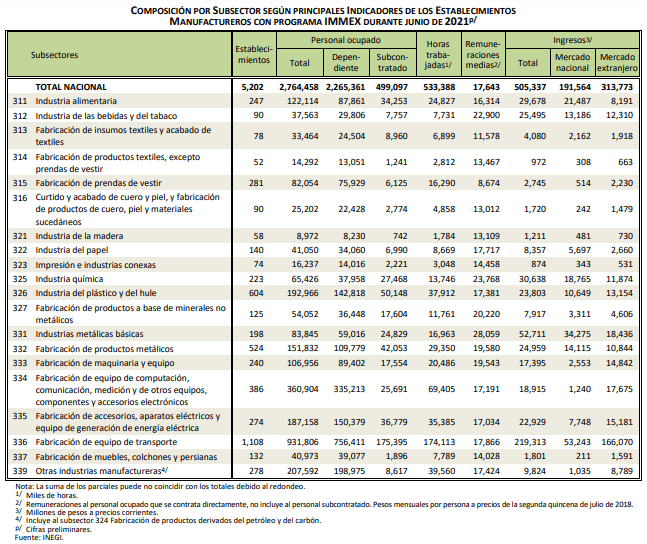 Likewise, in December 2020, several laws related to manufacturing, the maquiladora industry, and imports and exports were enacted, which, among other things, harmonized previous import and export laws with the USMCA and established new tariffs that cover certain manufactured goods.

At the end of 2006, the Ministry of Economy implemented the Program for the Manufacturing Industry, Maquiladora and Export Services (IMMEX).

With this, the economic units that meet the requirements to take advantage of the prerogatives that it offers, obtain authorization to elaborate, transform or repair temporarily imported goods with the purpose of making a subsequent export and / or destining them to the national market.

Last June, the personnel employed in IMMEX establishments increased 0.4% in June of this year compared to the immediately previous month, with seasonally adjusted figures.

According to the type of establishment in which it works, in manufacturers it increased 0.5%, while in non-manufacturers (which carry out activities related to agriculture, fishing, commerce and services) it decreased 1.2% at a monthly rate.

On the other hand, the real average salaries paid to personnel hired directly by IMMEX establishments showed a positive variation of 0.8% during June 2021 compared to last May, according to seasonally adjusted data.

In a disaggregated manner, in non-manufacturing economic units they were higher by 5.4% and in manufacturing by 0.4% in the period of one month.