Industrias Peñoles sold its Zimapan Mine to Santacruz Silver Mining Ltd. for $ 20 million, plus the applicable Mexican value added tax of $ 3.2 million.

Located in Zimapan, State of Hidalgo, the Zimapan Mine is currently leased by Carrizal de Minera Cedros, expiring on December 31, 2020.

The Zimapan Mine has had a long mining history with recent production of the last 10 years carried out by Carrizal under a mining lease with Minera Cedros.

During this time, mining operations relied on underground diamond drilling programs. Santacruz completed the acquisition of Carrizal in October 2019.

Assets to be acquired pursuant to the transaction include:

If Carrizal pays all outstanding royalties owed to Minera Cedros in connection with the existing lease of the Zimapan mine, which currently amounts to approximately $ 1.05 million, on or before October 31, 2020 and subject to Carrizal maintaining a guarantee through of a bank letter of credit or similar instrument in favor of Minera Cedros in the amount of 1 million dollars with a maturity date of February 15, 2021 or later, then Carrizal has the right to request an extension of the closing period until January 31, 2021 and, thereafter, you can request an extension of the closing period until March 31, 2021 if said guarantee is increased to $ 2 million and the purchase price increases by 10% after December 15, 2020. 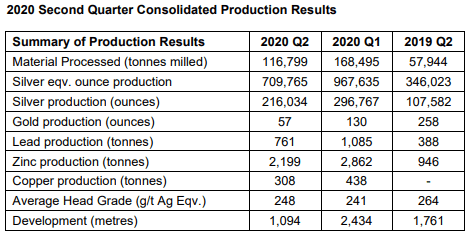 Carlos Silva, CEO of Santacruz, stated: “This would be a transformative transaction for Santacruz by adding the Zimapan mine, which I have had the privilege of leading for the past 12 years, to the Company’s existing mining projects.”

Peñoles is the world’s largest producer of refined silver and the most important of metallic bismuth in America.

In addition, Peñoles is a Latin American leader in the production of refined gold and lead, and is among the world’s leading producers of refined zinc and sodium sulfate.

Peñoles shares have been listed on the Mexican Stock Exchange since 1968.