The net sales of Peñoles decreased in the second quarter of 2022 to 1,469.7 million dollars (-6.6% year-over-year), due to lower volumes sold, mainly of gold, zinc and concentrates, partially mitigated by higher prices, reported Intercam Banco.

This was accompanied by a lower loss on sales hedges, with a favorable effect of 18.9 million dollars. 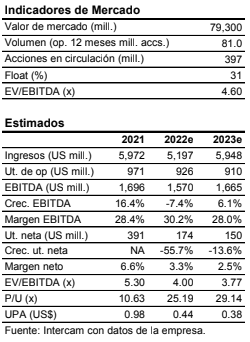 At the same time, the cost of sales registered an increase of 10.4%, as a result of higher cost of metal sold and higher production costs due to inflation.

The prices of the metals that the company produces and sells had ups and downs during the second quarter, caused by persistent inflation, concerns about a recession or global stagflation and more restrictive monetary policies.

As for production, gold volumes decreased -17.2% year over year, due to the lower recovery at Herradura and the decrease in ore processed at this unit. Silver production showed a favorable variation (+1.4%), mainly due to a higher contribution from Juanicipio and Fresnillo.

Meanwhile, lead fell 1.6% due to lower head grades at Saucito. Zinc production was higher (+1.0%) thanks to higher volumes, grades and recoveries at Fresnillo and Juanicipio.

Copper production increased +3.6% due to higher head grades and recoveries at Capela.

Finally, copper cathode at Milpillas reported -29.7% lower production, as the decision was made to suspend mining at the mine in mid-2020 and only continue to produce cathode from the leaching of copper ore in the yards.

The lead-silver circuit had a worse performance during the second quarter, due to lower production at Herradura and due to failures in the sintering process at the Smelter.

This resulted in lower lead production by -9.3 percent and silver by -3.2 percent.

At the Zinc Plant, the volume of concentrates treated was lower due to unscheduled shutdowns, which affected the production of refined zinc (-21.0%).

Sodium sulfate production had a variation of -2.5%, due to a downward adjustment of the production rate, while magnesium oxide production increased +2.5% due to the reactivation of demand from the construction and automotive industries.