This data excludes the production of Pemex partners.

On the other hand, non-associated gas increased its production by 84 MMcfd; This implies a growth of 9.1% in relation to the first quarter of 2020.

This is mainly explained by the completion of wells in the Ixachi field, which offset the natural decline of the fields in the Reynosa Asset.

In addition, the reclassification of the Tizón field from associated gas to non-associated also contributed to the increase in production.

In 2020, according to its own description, Pemex had a positive trend in crude oil production, averaging 1 million 705,400 barrels per day (Mbd), a volume 0.3% higher than in 2019, mainly derived from the development of wells in new fields, immediate attention to operational problems and reduction of time in interventions for the restoration of wells due to failures in electrocentrifugal pumping, as well as greater activity in well maintenance.

This was able to overcome the effects of the natural decline and the increase in the fractional flow of water in mature fields, as well as the closure of production due to high crude inventories and bad weather conditions. 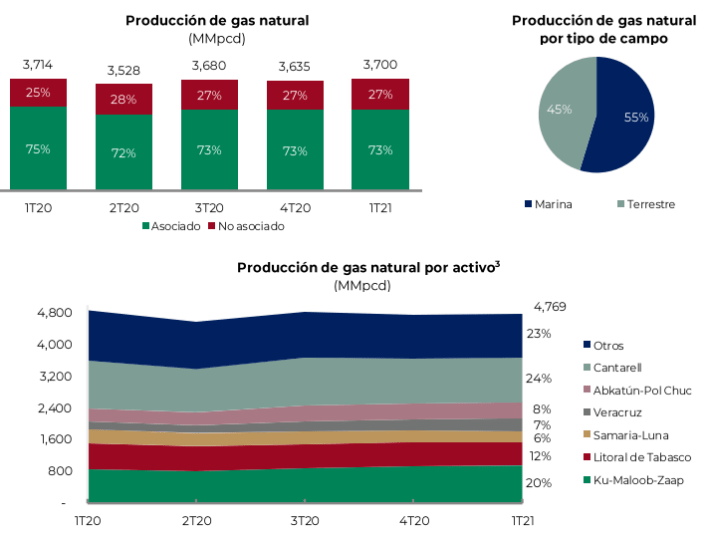 Regarding natural gas, production reached 4,851.9 million cubic feet per day (MMcfd), being 3,729.7 MMcfd of hydrocarbon gas and carbon dioxide and the rest (1,122.1 MMcfd) was nitrogen.

This result, 0.9% lower than that registered in 2019, is explained by the behavior in the associated gas marine fields such as Caan, Homol, Kax, May, Tsimin and Xux, in the same way there was a decrease in the Poza Rica fields -Altamira for associated gas and Reynosa for non-associated gas, which are in a decline stage.