Pemex’s fuel theft losses amounted to 601 million pesos in the second quarter of 2020, which represented a decrease of 30.4% year-on-year.

Pemex stated that as a result of the joint strategy with the federal government, as of June 30, 2020, the stolen volume of fuel decreased by 95% with respect to the average registered in 2018.

The illicit fuel market in Mexico involves the theft, adulteration, and illegal transportation, storage, distribution, and commercialization of the hydrocarbons that Pemex and other companies produce.

This criminal activity consists mainly of the following:

The illegal removal of Pemex pipelines threatens the integrity of its pipeline system, increasing the associated risks for personnel, facilities, the general population and the environment.

Likewise, the theft of fuel from the Pemex pipelines has caused volumetric deviations of products, explosions, loss of life, injuries and environmental damage.

Increased vigilance, as well as measures taken against the illegal fuel trade, have enabled Pemex to protect 12.2 million liters of hydrocarbons in 2019.

Altering the quality of the product, which negatively affects the consumers and the reputation of the company.

In recent years, Pemex has seen an increase in the theft and illegal trade in the fuels it produces. 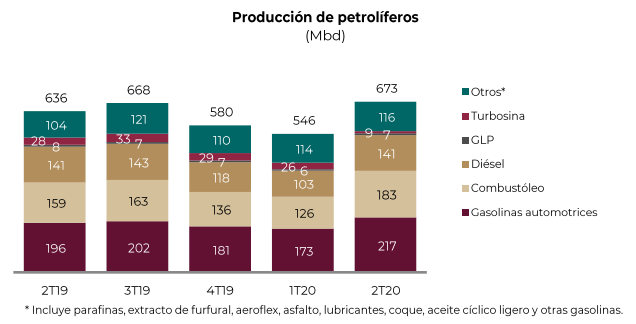