The Bank of Mexico (Banxico) indicated that the most lasting effects caused by the Covid-19 pandemic are still unknown, and there is a risk of outbreaks that imply greater containment measures.

After the sharp contraction of economic activity registered in April and May as a result of the pandemic and the measures to face it, since June the Mexican economy has recovered as a result of the resumption of productive activity in various sectors and a reactivation demand, especially external.

Banxico is the central bank of Mexico. Its functions and administration are governed by article 28 of the Constitution, as regulated by the provisions of the Bank of Mexico Law.

The main objective of Banco de México is to provide the country’s economy with the national currency, the peso.

In pursuing this purpose, your primary objective is to seek stability in the purchasing power of the peso.

“However, it remains below pre-pandemic levels and there is still marked uncertainty regarding the future evolution of the economy, since the pandemic is still ongoing, restrictions on the operation of various activities persist, the lasting effects caused by the health emergency, and there is a risk of outbreaks that imply greater containment measures,” Banxico said in his quarterly report July-September 2020, released this Wednesday.

According to the Report, going forward, as in other countries, the recovery of the Mexican economy will depend on the evolution of the different components of aggregate demand and the challenges that each productive sector faces. 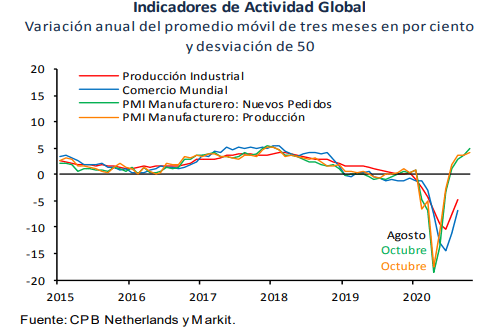 During most of the third quarter of the year, the national financial markets showed a positive behavior.

Although they were subject to episodes of volatility as of mid-September, these have been more limited than those registered in March and April.

Thus, during the second half of September, the price of the Mexican peso depreciated and longer-term interest rates and risk premiums increased.

This was associated with international financial volatility, which has moderated recently.

Towards the end of the reporting period, longer-term interest rates decreased and the peso appreciated.

Going forward, new episodes of risk aversion and volatility cannot be ruled out, which will depend on the evolution of the pandemic, as well as other idiosyncratic and external risk factors.

Inflation in Mexico increased in the third quarter of 2020 compared to the previous quarter.

After being at a particularly low level of 2.15% in April, annual headline inflation went from an average of 2.77% in the second quarter to 3.90% in the reference quarter and registered 3.43% in the first half of November.

The upward behavior of headline inflation in the third quarter was due both to the evolution of the core component and a significant increase in the non-core component. 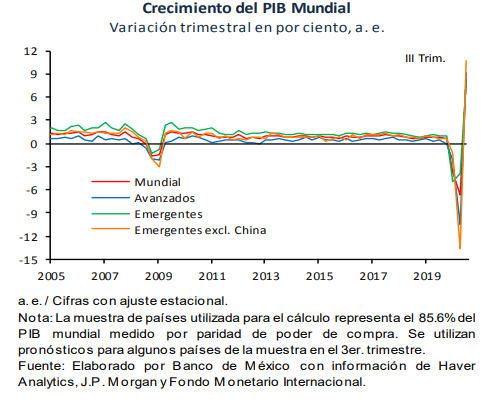 This recomposition within core inflation reflected the effects of the pandemic on household consumption patterns, coupled with the effects of supply shocks and exchange rate depreciation.

However, since August some of the shocks that had pushed core inflation upward have been moderating, while in the first half of November the offers of “El Buen Fin” influenced the fact that it presented a marked reduction.

Regarding non-core inflation, its behavior has been determined, to a large extent, by the evolution of energy prices, which in turn reflects the dynamics of international references.

During 2020, Covid-19 implied shocks that affected all countries in a generalized way, having repercussions on economic activity, inflation and global financial conditions.

Thus, after a deep global economic contraction in the second quarter, a recovery began to be observed during the third quarter of the year, mainly due to the reopening of various productive activities.

This recovery has been partial and there is still a high degree of uncertainty about the pace it will take in the coming quarters, which will depend, among other factors, on the evolution of the pandemic itself and the behavior of the different components of aggregate demand and sectors.

After the episode of high global risk aversion in March and April, financial markets have improved, although they have remained subject to periods of volatility, albeit more limited, and significant risks persist.

This context presents significant challenges for the Mexican economy, its recovery, the evolution of the labor market and the maintenance of macroeconomic stability and the financial system.

In this complex environment, Banco de México has sought to conduct monetary policy in a timely and prudent manner, trying to maintain the purchasing power of the national currency.

Additionally, various measures were adopted in accordance with its purposes of promoting the healthy development of the financial system and the proper functioning of the payment systems.

Delving into the international environment that Mexico has faced during the period covered by this Report, the information available suggests that the referred process of recovery of world economic activity has been heterogeneous between countries and, recently, has proceeded at a slower pace than that observed between May and June.

Thus, the global economy is still far from reaching pre-pandemic activity levels and there is a risk that recovery will be hampered by new containment measures.

This has occurred recently in various countries, such as some Europeans and the United States, among others, due to the outbreaks in the number of infections.

In this context, the growth forecasts of multilateral organizations continue to anticipate a strong contraction of GDP for 2020, although they were revised upwards during the period covered by this Report since the contraction was less than anticipated in the second quarter.

Expectations for 2021 continue to foresee a gradual recovery, albeit slightly less than expected.

These forecasts are subject to a high degree of uncertainty and to the evolution of demand components in various countries and economic sectors.

In this context, the balance of risks for world growth continues to be negative.

On the other hand, in the reporting period, general and underlying inflation in most advanced economies increased slightly, although they continued to be at low levels and below the objectives of their respective central banks.

In response to this environment, the monetary and fiscal authorities have implemented stimulus measures to mitigate the adverse effects of the pandemic on the economy.

The main central banks have used their balance sheets to promote the proper functioning of the financial markets and have kept interest rates at historically low levels, emphasizing their commitment to maintain an accommodative stance for a prolonged period until a sustained increase in interest rates occurs. inflation.

Among emerging economies, most of them faced inflation below their targets, and the central banks of several of these economies continued to reduce their policy rates in the reporting period.

In addition, various economies have maintained or expanded their fiscal support measures to cope with the pandemic.

The International Monetary Fund estimates that the fiscal supports announced up to mid-September represented around 12% of world GDP.

In the case of advanced economies, stimulus measures, including additional spending, tax cuts and the granting of loans and guarantees, reach 20% of GDP, while in the case of emerging economies, these measures they represent about 6% of GDP on average.

During most of the third quarter, international financial markets continued to show a positive behavior, driven by the gradual recovery in world economic activity and the monetary, fiscal and financial stimuli implemented in the systemically important economies, as well as the expectations of progress in the development of a vaccine against Covid-19.

However, from mid-September there were episodes of volatility, albeit more limited than those observed during March and April.

This is due to the lower probability of approval of a new fiscal support package in the United States and the electoral process in that country, as well as a new wave of infections in various countries, among other factors.

Among the main additional risk factors to the evolution of the pandemic are: high levels of indebtedness in both the public and private sectors, an increase in the number of company bankruptcies in the sectors most affected by the pandemic, a new escalation in trade tensions, a worsening of geopolitical and social conflicts in various regions of the world, the possibility of the United Kingdom leaving the European Union without a trade agreement, the insufficiency and / or premature withdrawal of stimulus and support measures economic to face the pandemic, and the risk of greater natural disasters due to environmental factors.