Panama has more than twenty trade agreements, most of them with American countries, according to a report by the World Trade Organization (WTO).

To begin with, Panama is a member of the Central American Common Market (MCCA) and the Latin American Integration Association (ALADI).

The agreements that Panama has within the ALADI framework are partial scope trade agreements, as are those with the Dominican Republic and Trinidad and Tobago.

Current trade agreements of Panama in 2021 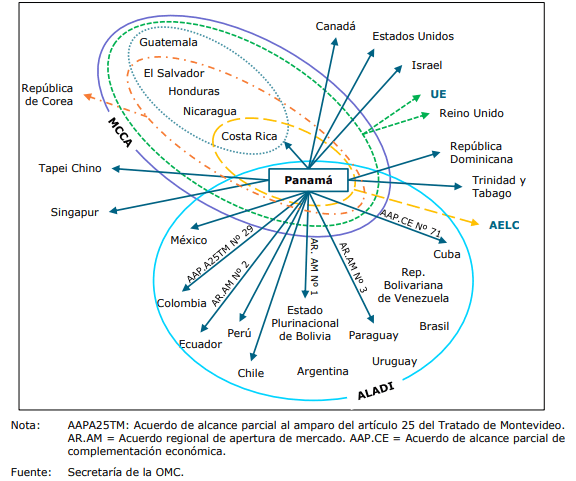 cuadro panamáPanama immediately adopted certain provisions, and continues to negotiate with the other States Parties for the full adoption of the rest of the provisions.

As for the ACI, Panama immediately adopted the nomenclature and customs duties, with some exceptions.

According to the authorities, in 2021 Panama still has to adopt about 40% of the ACI.

The WTO report indicates that in 2013, upon joining the CACM, Panama immediately granted duty-free treatment to goods from Costa Rica, El Salvador, Guatemala, Honduras and Nicaragua, with some exceptions for which the tariffs or will be phased out.

The liberalization of excluded goods could be the subject of future negotiations; for example, this was the case of Costa Rica, with which Panama agreed in 2018 to liberalize tariff lines that were initially excluded. Panama negotiated tariff quotas with Costa Rica and Guatemala.

Also, in 2013, Panama adopted the Central American Regulation on the Origin of Goods. It adopted some of the specific rules of origin; however, the rest are still being negotiated. 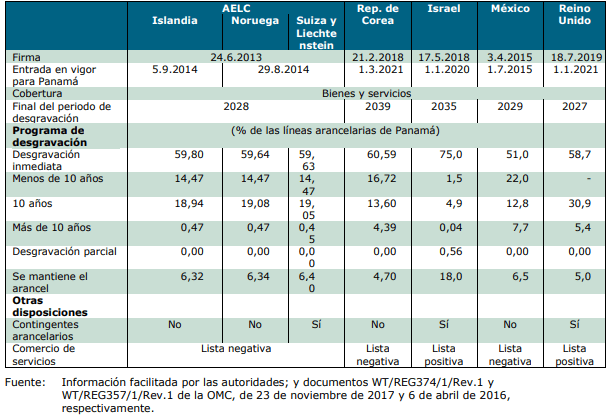 These agreements include trade in goods and services, promote investment, and often include new trade issues.

The free trade agreement with Mexico, which entered into force in 2015, replaced the AAP.A25TM No. 14 agreement, through which Mexico had granted unilateral preferences to Panama since 1985.

Therefore, the tariff reduction program, the tariff quotas, the rules of origin and the special treatment for banana imports negotiated with the EU are applicable to the United Kingdom.

In the Association Agreement with the United Kingdom, only the necessary legal and technical changes have been made so that the agreement can be implemented (mutatis mutandis principle); for example, the volume and annual increase of tariff quotas have been modified.

The tariff reduction programs that Panama has negotiated with EFTA, the Republic of Korea, Israel, Mexico and the United Kingdom cover the entire tariff universe.

In general, Panama did not negotiate the liberalization of trade in “sensitive” products, mainly agricultural products.

With Israel, Switzerland and the United Kingdom, Panama has agreed tariff quotas. With Trinidad and Tobago, Panama has a partial scope agreement through which it has agreed to grant preferential treatment to 214 tariff lines: 191 lines have a preference of 100, 50 or 25%, while for 23 lines the tariffs will be eliminated in a term of 10 years.