The companies Pacasmayo, UNACEM and Cementos Yura mainly supply the demand for cement in Peru.

While Pacasmayo dominates the northern region of Peru, UNACEM supplies the central region and Cementos Yura focuses on the southern region.

Above all, this decline was a consequence of the general restrictions of the pandemic and the suspension of non-essential economic activities, including construction.

The restrictions were progressively relaxed following certain phases, including phase 1 for the production and supply of cement and construction projects of national interest, and subsequently with phase 3 the general opening of both public and private construction projects. 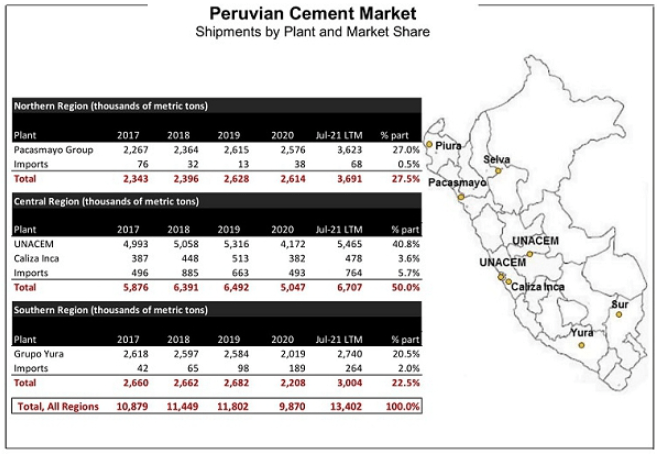 The northern region of Peru, according to the National Institute of Statistics and Informatics (INEI) and Apoyo Consultoría, represents approximately 28.9% of the country’s population and 14.9% of the national Gross Domestic Product (GDP).

Despite the sustained growth of the country during the last 10 years, Peru continues to have a significant housing deficit, estimated at 1.9 million homes throughout the country, according to the Ministry of Housing, Construction and Sanitation.

Regarding the market, Pacasmayo said that most of the cement is sold in Peru to a highly fragmented consumer base of individuals who tend to gradually buy bags of cement to build or improve their homes, a segment that the industry refers to as “ self-construction ”.

However, cement can also be sold in bulk according to customer requirements.

The success of a cement company is intrinsically linked to the sophistication of its distribution network and its emphasis on quality assurance throughout the supply chain.

According to Pacasmayo, the Peruvian cement market is basically made up of three groups and a small plant, which have six cement-producing companies:

The following are the main characteristics of the cement sector in Peru: