Grupo Aeroportuario del Centro Norte (OMA) registered a 37.8% decrease in its passenger traffic in the first quarter of 2021, totaling 3.0 million.

Based in Monterrey, Mexico, the airports with the lowest drop in passengers, in percentage terms, compared to the first quarter of 2020 were Culiacán, Ciudad Juárez and Reynosa.

As part of its results, OMA became the first airport operator to place a green bond in the local Mexican market and the only one with a valid bond in Latin America.

On April 16, 2021, OMA completed the issuance of 3.5 billion pesos in long-term stock certificates in the Mexican market in two tranches.

One of the issues was issued with the green bond category.

Through its subsidiaries, OMA has concessions to manage, operate and exploit 13 airports in Mexico, several of which are located in the north-central region of the country.

Under certain circumstances, the SCT may extend the validity of the Company’s concessions for a period of up to 50 additional years.

Also, the terms of the company’s concessions include the right to occupy, use and improve the premises dependent on its airports, which are not owned by the company, and will be returned to the government once the concession ends.

As operator of the 13 airports covered by its concessions, the company charges the airlines, passengers and other users certain fees for the use of its airport facilities. 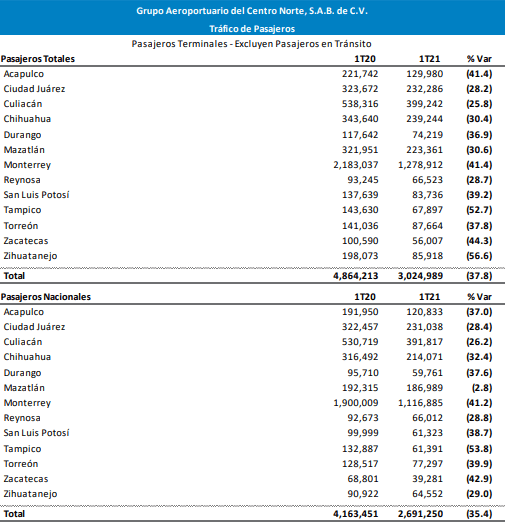 In addition, the company receives income from rentals and other diversification and commercial activities carried out at its airports, such as the leasing of premises to restaurants and shops, the operation of parking lots, the operation of the NH Collection Hotel in Terminal 2 and the Hilton Garden Inn hotel at the Monterrey airport, among others.