In fact, the impact on freight rates has been greatest on trade routes to developing regions, where consumers and businesses can least afford it.

Currently, rates for South America and West Africa are higher than for any other major trading region.

By early 2021, for example, freight rates from China to South America had risen 443% compared to 63% on the route between Asia and the east coast of North America.

Part of the explanation lies in the fact that routes from China to countries in South America and Africa tend to be longer.

“When empty containers are in short supply, an importer in Brazil or Nigeria must pay not only for the transportation of the entire import container, but also for the cost of maintaining the inventory of the empty container,” the report says.

Another factor is the lack of return cargo. The nations of South America and West Africa import more manufactured goods than they export, and it is costly for shippers to return empty boxes to China on long routes.

When the mega-ship Ever Given blocked traffic in the Suez Canal for nearly a week in March, it triggered a further increase in container spot freight rates, which had finally begun to stabilize from the all-time highs reached during the Covid pandemic. -19. 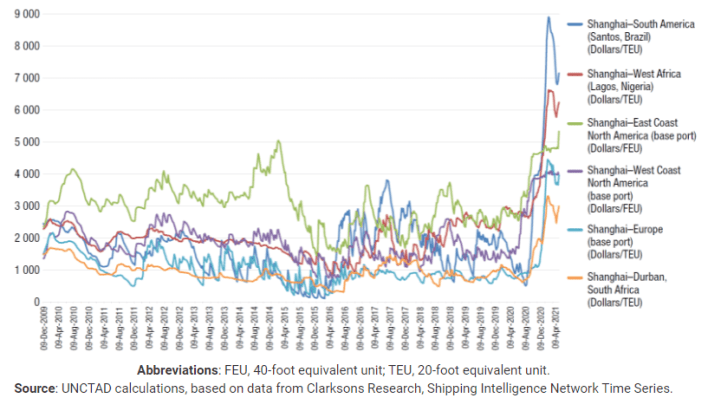 Shipping freight is a major component of trade costs, so the further increase poses an additional challenge for the global economy as it struggles to recover from the worst global crisis since the Great Depression.

“The Ever Given incident reminded the world how dependent we are on shipping,” said Jan Hoffmann, director of UNCTAD’s trade and logistics branch. “About 80% of the goods we consume are transported by ships, but we easily forget that.”

Container fees have a particular impact on global trade, as nearly all manufactured goods, including clothing, medicines, and processed food products, are shipped in containers.