The IMEF Non-Manufacturing Indicator registered an increase in March of 3.2 points to close at 52.8 units and be located in the expansion zone after spending thirteen consecutive months in the contraction zone.

The trend-cycle series of this indicator increased 0.7 units and remained in the expansion zone for the second consecutive month, since the February data was revised upwards and also crossed the threshold, after having remained in the contraction zone for twenty-one months.

The IMEF Indicator is a diffusion index that assesses the economic environment based on a survey of five qualitative questions.

The IMEF Indicator ranges from 0 to 100 points and the level of 50 points represents the threshold between an expansion (greater than 50) and a contraction (less than 50), of economic activity

Going forward, according to the IMEF, the most relevant challenges that the Mexican economy is likely to experience will be the vaccine inoculation program, as well as mitigating the probable outbreak of Covid-19 after the Easter holiday period and improving the investment climate .

The latter has deteriorated significantly due to the series of incessant anti-market legislative initiatives that, even if they are not approved, generate political tensions and reduce the confidence to invest.

Likewise, the citizen consultations of doubtful representativeness, which have pushed back private investment projects already in the construction phase and the unconstitutional agreements to de facto bury the energy reform of the previous administration, have also contributed to the deterioration in the investment climate. 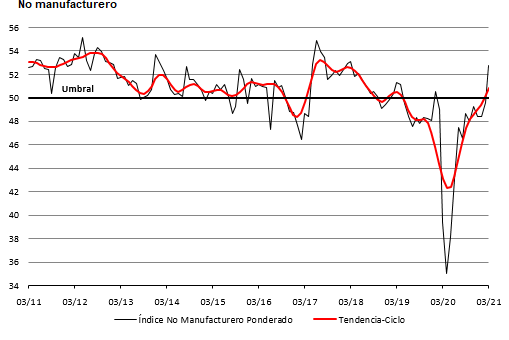 Investment growth is a necessary condition for achieving a sustainable recovery, especially after having experienced the deepest recession since 1932.