Both occupy the second and third position, respectively, among the companies that build the most cars in the country, surpassed by General Motors, which had year-on-year growth at a single digit rate.

In general, and in response to Covid-19, assembly companies discontinued production at their manufacturing facilities in the United States, Canada, and Mexico in March 2020.

They then gradually resumed their critical manufacturing operations in North America from May 2020 and reached industrial production levels in line with demand in June 2020.

In the accumulated from January to July, Nissan produced 243,480 light vehicles in Mexico, a decrease of 38.2% year-on-year.

In that same period and with the same comparison, Volkswagen assembled 145,101 units, a decrease of 45.6%, affected by a greater lag at the beginning of its operations due to stricter restrictions in the state of Puebla.

Lastly, General Motors manufactured 382,377 units in the first seven months of the year, which represented a 26% drop, at the annual rate. 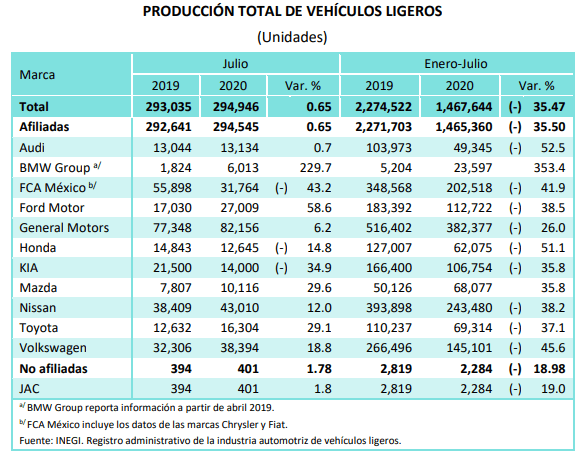 In January 2020, the World Health Organization declared the Covid-19 outbreak a public health emergency and in March 2020 declared it a global pandemic.

Since then, the outbreak has spread globally, causing significant disruption to the global economy, including the auto industry.