Nissan and Volkswagen excelled in the production of cars and other light vehicles in Mexico during the period from January to July 2021, Inegi reported this Friday.

In the first fall, Nissan produced 331,983 units and that number represented a year-on-year increase of 36.3 percent.

Nissan Motor Company is a Japanese manufacturer that sells its vehicles under the Nissan, Infiniti and Datsun brands. 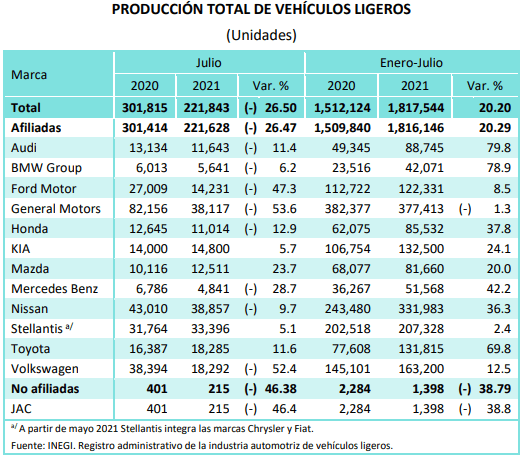 The main reason for this decrease was due to the impact of Covid-19 globally, which caused a decrease in demand, particularly in the first quarter.

Specifically, the global sales of the Nissan Group amounted to 4 million 052,000 units, a decrease of 17.8% compared to the previous fiscal year.

As a result, the Group’s market share decreased by 0.5 points, to 5.3% compared to the previous year.

According to its own projections, Nissan’s global retail volume for fiscal 2021 is expected to increase 8.6% from 4.4 million units a year earlier.

Nissan NEXT is making steady progress, however there is continued business risk due to semiconductor supply shortages and rising raw material prices this fiscal year.

While working to minimize the impact of these risks and factoring in the potential impact, the company has set the operating profit forecast at plus or minus zero.

This German company reported a production of 163,200 light vehicles in Mexico in the first seven months of 2021. With this, it achieved a 12.5% ​​year-on-year increase.

Although General Motors was placed as the company that produced the most in Mexico (377,413 units), it reported a 1.3% decrease in this indicator, according to Inegi data.