The Government of Mexico published on July 1, 2020 the so-called “New LIGIE” (General Import and Export Tax Law), related to the Sixth Amendment and which updates and modernizes one of the most important instruments for foreign trade.

In this process, the Ministry of Economy initiated public consultations to update and harmonize the different foreign trade instruments in accordance with the new tariff rate.

During the 179 calendar days after publication, the foreign trade instruments will be updated and harmonized in accordance with the new tariff rate.

In the coming days, the Ministry of Economy will publish the work schedule, but this Wednesday it began with two consultations, according to Juan Díaz Mazadiego, director of Foreign Trade:

The Ministry of Economy will publish the list of comments received on July 27, 2020.

In 2017, in order to achieve a better and better identification of foreign trade goods, Mexico, like 153 other contracting parties to the International Convention on the Harmonized System, committed to implement the updates of the Sixth Amendment. 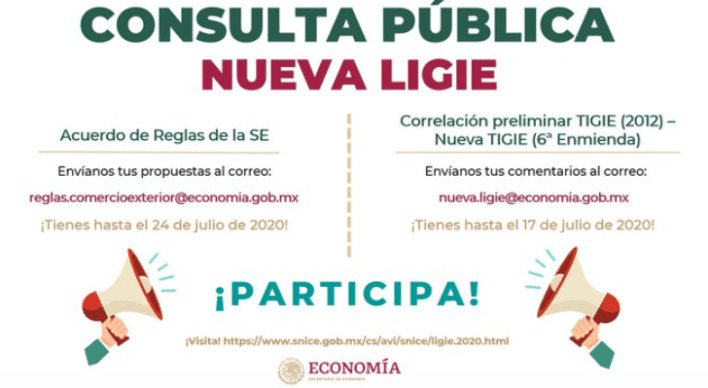 The Harmonized System is reviewed every five years by the World Customs Organization (WCO), in order to update, incorporate or eliminate merchandise in that classification.