Nemak announced this Friday that its controlling company, Alfa, received authorization from the National Banking and Securities Commission (CNBV) to register the shares of Controladora Nemak, S.A.B. de C.V. (BMV: NMK) in the National Securities Registry.

As a result of the transaction, Alfa shareholders will receive one share of Controladora Nemak for each of their Alfa shares at market close on December 11, 2020.

Controladora Nemak will begin trading on the Mexican Stock Exchange (BMV) as of December 14, 2020.

“We see this transaction as a positive step on our path of growth and transformation. By becoming a fully independent company, we are confident of being even better positioned to drive the creation of value for our shareholders, ”said Armando Tamez Martínez, CEO of Nemak, in a statement.

Also this Friday, Alfa announced to its shareholders the mechanism for the distribution of the shares of Controladora Nemak, after having received authorization from the CNBV for the registration of said shares in the National Securities Registry (RNV).

“We are just days away from completing the first big step in our Value Unlocking strategy. Nemak will soon become the first completely independent ALFA company for the benefit of our shareholders, ”said Álvaro Fernández Garza, Alfa’s CEO.

In accordance with the provisions of the applicable legal provisions, Alfa published an Informative Prospectus and a Notice to Shareholders detailing the information required in advance of the distribution and listing of the shares of Controladora Nemak on the BMV.

One of the world’s largest producers of polyester (PET, PTA, fibers and PET); leader in the Mexican market for polypropylene, expandable polystyrene and caprolactam.

A leading multinational company in the food industry, which produces, markets and distributes quality private label products, including cold cuts, cheese, yogurt and other refrigerated and frozen foods. 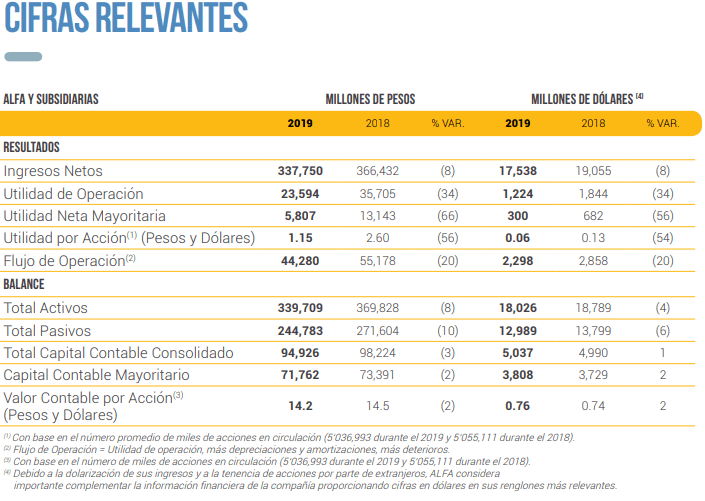 Leading provider of innovative lightweighting solutions for the global automotive industry, specializing in the development and production of aluminum components for powertrain and structural applications for electric vehicles.

Information and Communication Technologies (ICT) Company that serves the wholesale, business and government markets in Mexico.

Company that operates in the hydrocarbon industry in the US and Mexico.

In the last decade, ALFA has consolidated its position as a global company. About 70% of its revenues are generated outside of Mexico, in part because its production operations expanded from 16 countries in 2009 to 29 today.

In the same period, income and EBITDA have more than doubled, while dividends have quadrupled. In addition, the company has maintained a financial discipline that is reflected in an investment grade credit rating and access to financing at attractive conditions.